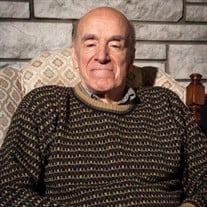 Wantage - Kenneth W. Cooper, Sr., age 83, passed away on Saturday, July 21, 2018 at Ave Care in Newton. Born and raised in Brooklyn, New York to the late George and Ethel (Mumford) Cooper, he moved to Norwood in 1969, where Mr. Cooper lived until moving to Sussex County in 2014. He had been employed as a facilities manager for Spectra Laboratories, a subsidiary of Fresenius Medical Care in Rockleigh for many years before his retirement in October 2012. Mr. Cooper was a former member of the Ambulance Corps in Norwood for many years. He was was predeceased by his wife, Joan Cooper; his two brothers, George and Charles Cooper, and his sister, Nancy Croak. Mr. Cooper is survived by his three sons, Ken Cooper and his wife Nicole of Wantage, Scott Cooper and his wife Kirsten of California, Robert Cooper and his wife Marie of South Carolina; his sister, Dorothy Shields of Brooklyn, New York; and four grandchildren. Funeral services will be held at 3 p.m. on Sunday, July 29, 2018 at the Pinkel Funeral Home, 31 Bank Street (Route 23), Sussex. Friends may pay their respects to the family on Sunday prior to the service from 1 p.m. to 3 p.m. at the funeral home. Private cremation services will be held at the convenience of the family. In lieu of flowers, the family requests that memorial donations be made to the Alzheimer's Association, 225 N. Michigan Ave., Fl. 17, Chicago, IL 60601 or to the Multiple Sclerosis Association of America, National Headquarters, 375 Kings Highway North, Cherry Hill, New Jersey 08034. Friends may offer their condolences to the family at www.pinkelfuneralhome.com

The family of Kenneth W. Cooper Sr. created this Life Tributes page to make it easy to share your memories.

Send flowers to the Cooper family.