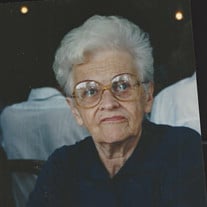 Sussex - Julia "Jule" L. Devine, age 96, passed away on Sunday, May 7, 2017 at Harris Heathcare Center at Bristol Glen Retirement Community. Born on July 6, 1920 in Sussex to the late Bryson and Ether Case, Mrs. Devine lived in Sussex County all of her life. Mrs. Devine served eight years as a member of the Sussex Borough Council and was the first woman to become acting Mayor in 1976. Prior to serving on the Council, she was the Borough Welfare Director for eighteen years, first Secretary to the Planning Board, and over the years served on the Planning and Zoning Board as well as the Property Maintenance Board. Mrs. Devine never missed a scheduled meeting be it council, committee, or member of a board she served on until she retired in October 2005. Mrs. Devine was most recently named Sussex Borough Senior Citizen of the Year of 2016. She was the founder of the Sussex Nutrition Site, coordinator for Office on Aging, member of the County Nutrition Council and past president of the Sussex County Extension Advisory Council and one of the first Consumer Affairs Officer in Sussex County. Mrs. Devine was a graduate of the '38 class from Sussex High School and organized their 75th anniversary. She was a graduate of Drake Business College and was affiliated with the defunct Sussex County Independent newspaper as their bookkeeper, advertising solicitor and photographer, recognized as the first woman newspaper photographer in the State, received an award from the American Press Association all under the name of Jule. Mrs. Devine was employed by the Sussex County Division of Social Services for several years and the Sussex County Welfare Board. Julia was married to William C. Devine on June 17, 1943. She and her husband owned a confectionery and sporting goods store in Franklin. He predeceased her on August 15, 2010. Mrs. Devine is survived by her son, Thomas Devine, PhD and his wife, Julianne of Jackson; two grandchildren, Jeanine Dilling and her husband Robert of Long Valley and Gregory Devine and his wife Katherine of Toms River; and five great grandchildren, Allison Michelle Dilling, Rachel Marie Dilling, Madelyn and Aubery Devine and Brandan Dilling. Funeral services will be held at 11 a.m. on Wednesday, May 10, 2017 at the Pinkel Funeral Home, 31 Bank Street (Route 23), Sussex. Interment to follow at North Hardyston Cemetery. Friends may pay their respects to the family one hour prior to the service from 10 a.m. to 11 a.m. at the funeral home. Online condolences may be offered to the family at www.pinkelfuneralhome.com

The family of Julia L. Devine created this Life Tributes page to make it easy to share your memories.

Send flowers to the Devine family.