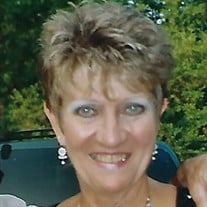 Vernon- Judith Anne (Bowker) Schlosser, age 75 passed away on Wednesday, January 2nd, 2019 at Newton Medical Center, surrounded by her devoted and loving family. She was born on June 29, 1943 in East Orange to the late William Douglas and Margaret D. (Coull) Bowker. She grew up in Bloomfield and moved to Vernon in 1961. She was a graduate of Sussex High School and Dover Business College. During her life, she was employed by The Star Ledger newspaper and Peter Conforti’s law office. Judy was a remarkable daughter, mother, and grandmother. She was devoted to her dear parents, while they were living. Her nature was one of compassion and kindness, which she extended to all of her family and friends and her home was always open to all that entered. This included the many pets that she befriended and nurtured throughout her life. Her dog was always by her side and was very spoiled. She approached life as a celebration and her goofy sense of humor and kooky antics are part of many people’s favorite memories. She loved to cook and bake and anticipated the holidays; especially Christmas. She always embraced the spirit of giving. Her favorite past times were drawing, reading, watching great movies, feeding the birds and spending time with her family. She sang in the church choir at the Sussex United Methodist Church during her life and loved dancing and music; especially songs from the 50’s. She loved the ocean and swimming and spent many vacations in Avalon and Fort Lauderdale, Florida and spending winter weeks in Vermont. Judith is survived by her companion, Carl Schlosser; her dear friend and former husband, William Schlosser; and her four daughters, Kimberly Cline and spouse Tom Cline and their two daughters, Courtney and Carley Cline; Deborah Schlosser and spouse Timothy Coleman and their son, Devon Coleman; Susan LiCalsi and spouse Christopher LiCalsi and their son, Evan LiCalsi; Donna Schlosser and longtime partner “Jaybird” Jacobson and their children, Shane and Meredith Rodriguez and James Jacobson; and many brother and sister in-laws, nieces and nephews and cousins. Her friends were her family and she is survived by her dear friends; Brenda Houghtaling, Judy Lang, and Kathy Russo; and of course, her loyal dog; Molly. Her children’s friends became her friends. There are those individuals who enter the world and leave an indelible mark of love and generosity on all that they come into contact with. Her absence in the world is felt by so many. She left us too soon during her favorite time of the year. A bright and strong spirit was given to our lives and her light will be missed so much. We can only hope to emulate her as best as we can. Rest in peace beautiful soul. We love you so much. Private cremation services have been entrusted to the Pinkel Funeral Home, 31 Bank Street (Route 23), Sussex. A memorial service will be scheduled at a later date in the spring. Donations may be made in Judith A. Schlosser’s memory to Father John’s Animal House, 50 Father John’s Lane, Lafayette, NJ 07848, or by logging on to their website at fatherjohns.org as well as memorial donations to The Trigeminal Neuralgia Association by logging onto their website at www.EndThePain.org Online condolences may be offered to the family at www.pinkelfuneralhome.com

Vernon- Judith Anne (Bowker) Schlosser, age 75 passed away on Wednesday, January 2nd, 2019 at Newton Medical Center, surrounded by her devoted and loving family. She was born on June 29, 1943 in East Orange to the late William Douglas and Margaret... View Obituary & Service Information

The family of Judith A. Schlosser created this Life Tributes page to make it easy to share your memories.

Send flowers to the Schlosser family.