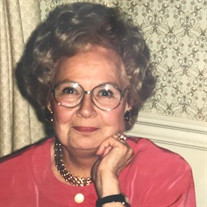 Wantage - Josephine G. Davis, age 96, passed away on Wednesday, January 30, 2019 at Newton Medical Center. Mrs. Davis was born in Newark, New Jersey on June 16, 1922, where she resided with her mother, Mary Gurka (nee Kohut), father, Peter Gurka, and sisters, Sophia and Estelle. Josephine was the youngest. After being widowed for a brief period, Josephine’s mother married Michael Karloff and the family subsequently moved to Ogdensburg, where Michael worked at the New Jersey Zinc Company until his death in 1950. Josephine was 9 years old when moving to Ogdensburg. She quickly adapted to the new country environment by testing out her shiny roller skates on Plant Street and by making new companions, particularly Inez Madden and Marylin Hyde. They would remain life long friends. Upon graduation from Franklin High School in 1940, Josephine went on to dental school in Newark, subsequently working as a dental assistant. She then went on to work in the planning department at Picatinny Arsenal for 11 years. After meeting Hobart (Hobie) Davis at a high school dance at Sussex High School, the couple dated, but took a brief pause during Hobie’s World War II tour and imprisonment in Europe. Following the victorious Allied Invasion of Normandy, known as D-Day, on June 6, 1944 (Hobie’s birthday) and Hobie’s consequent release, the couple married in September 1948. After settling in at the Davis homestead in Sussex, the couple gave birth to their son and only child Thomas in 1953. Shortly thereafter, Josephine became tragically widowed in 1955 when Hobie was suddenly killed in a car accident in Hardyston Township. She would never remarry and chose a courageously solo role in raising son Thomas. Always one to quickly adapt to her life’s many challenges, Josephine joined the staff at Alexander Linn Hospital on Walnut Street in Sussex, taking on a new set of unfamiliar circumstances. Nevertheless, during her 38 years of dedicated service at the hospital (which eventually became St. Clare’s), Josephine retired as Director of Human Resources and with plenty of experience in running the hospital at times when there was no administrator aboard. She would check everything from the dust on the tops of patient’s TV’s to ensuring that an employee’s concerns would be sufficiently addressed during orientation. While at the hospital, she also became involved in the annual March of Dimes fund raising program, coordinating the annual walk at the county fairgrounds. It became her pet project and cause. Upon retiring, Josephine pursued several interests and engaged in short distance regional travel to places of interest. She loved the culture of New York City as well as the Victorian mansions of Spring Lake. As a practicing Roman Catholic, she was especially inspired by the heartfelt homilies of Monsignor Anthony Dalla Villa, Rector of the Cathedral of St. Patrick’s. She was a member of the St. Monica’s Parish in Sussex since 1948. She enjoyed several shows at Radio City Music Hall and Carnegie Hall. The range of choices in New York City cuisine as well as the local region’s cuisine were among her passions. She was a frequent patron of Perona Farms in Andover for many occasions. On one such occasion, she would return to the car on a frigid New Year’s Eve after dinner and dancing to discover that she and her date would need a cigarette lighter to thaw the car door to unlock it. A recent favorite dish of hers was Veal Oscar. She was a talented culinary artist in her own right as well. Her spaghetti sauce, roasted chicken, stuffed cabbage and apple pie were among the best of her cooking. Her sense of humor was particularly sharp and she loved to laugh. She was a big fan of Stephen Colbert, Micky Rooney, Johnny Carson and W.C. Fields. Among her outdoor interests were flower gardening, landscaping and just observing a beautiful sunset. Standard flowers of hers were petunias and marigolds. She loved summers with relatives on Chincoteague Island, Virginia where she could spend an afternoon on the beach or consuming the day’s catch of raw oysters right off the boat. Josephine also had a passion for animals, with either a cat or dog during most of her life. They included her cat, Toinsy when she was 10 to a household Akita named Rika in 2015 who would greet her every morning at breakfast, looking for that predictable and reassuring hug. After a month of declining health with respiratory complications and pneumonia, her passing has marked the end of considerable discomfort, but also the beginning of a rejoining with her husband, parents and all her wonderful friends who have predeceased her in a transition into eternal life. Josephine is survived by son, Thomas of Wantage, member of the Rutgers faculty in New Brunswick. The family asks that donations be made in Josephine Davis’ memory to the March of Dimes Foundation, Donation Processing Center, P.O. Box 18819, Atlanta, GA 31126. A memorial service will be announced in the future. Private cremation services have been entrusted to the Pinkel Funeral Home, 31 Bank Street (Route 23), Sussex. Friends may pay their respects to the family at www.pinkelfuneralhome.com

The family of Josephine G. Davis created this Life Tributes page to make it easy to share your memories.

Send flowers to the Davis family.