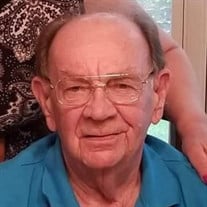 Hamburg - Joseph G. Weiss, Jr., age 89, peacefully passed away on Wednesday, January 13, 2021 at his residence. Born in Newark to the late Joseph G. Weiss, Sr. and Margaret (Ubhaus) Weiss, Joseph had lived in West Milford before moving to Sussex County in 1999. He had served in the United States Marine Corps as a Corporal during the Korean War. Mr. Weiss was a printer and color specialist for 38 years and was employed by Morristown Daily Record and USA Today, retiring 22 years ago. After his retirement, Mr. Weiss worked part-time at the Sussex Meat Packing in Wantage for the past 15 years. He was a lifetime member of the West Milford Volunteer Fire Department for over 25 years and a member of the Marine Corps League. Mr. Weiss is survived by his wife of 47 years, Gail (Phillips); his son, Steven Weiss of Bellows Falls, Vermont; his daughters, Margaret Amato and her husband Christopher of Pittsfield, Massachusetts, Barbara Labonte and her husband Michael of Barton, Vermont, Mary Stamelos and her husband Demetrios of Little Egg Harbor, and Kathleen Stanizewski and her husband Herbert of Mendon, Massachusetts; eleven grandchildren; and six great grandchildren. In lieu of flowers, please consider a donation in Joseph G. Weiss, Jr.’s memory to Marine Toys for Tots Foundation, Gift Processing Administrator, 18251 Quantico Gateway Drive, Triangle, VA 22172. Private cremation services have been entrusted to the Pinkel Funeral Home, 31 Bank Street (Route 23), Sussex.

The family of Joseph G. Weiss Jr. created this Life Tributes page to make it easy to share your memories.

Send flowers to the Weiss family.