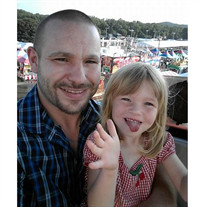 Wantage - Joseph A. Szczesny, Jr., age 35, passed away unexpectedly on Monday, October 30, 2017 at his residence. Born in Dover, Joe graduated from West Milford High School in 1999 and been a Sussex County resident for the past 9 years. He had previously worked at Team Services in Vernon before he was recently employed by the Dockbuilder’s Union in NYC as an apprentice. He was a friend of Bill W. and proud of his recovery. Joe loved his daughter and enjoyed spending quality time with her. He was an outdoors man, who had a passion for camping, hiking, fishing, and carpentry. He also was a football enthusiast and was involved with fantasy football. Joe is survived by his cherished daughter, Emma Marie; his father, Joseph A. Szczesny, Sr. and his wife Jean Wiedholz-Szczesny of Wantage; his mother, Debra Scialpi and her fiancé Dana Serra of West Milford; his step-father, David Monego and his fiancé Tracey Kozdemba of Ringwood; his step-daughter, Leah Nistok of Florida; his sisters, Gina Marie Monego, Harper Paige Monego, who is his goddaughter, Marissa Light, and Katie Light; his brother, Christopher Rivera; and his step-brother, Joel Ugrovics and his wife Dayna. Friends may pay their respects to the family on Thursday, November 2, 2017 from 4 p.m. to 8 p.m. at the funeral home. Funeral services will be held at 11 a.m. on Friday, November 3, 2017 at the Pinkel Funeral Home, 31 Bank Street (Route 23), Sussex. Private cremation services will be held at the convenience of the family. In lieu of flowers, the family requests that memorial donations may be made to benefit the future education of Joe’s daughter, Emma Marie Szczesny. Online condolences may be offered to the family on www.pinkelfuneralhome.com

Wantage - Joseph A. Szczesny, Jr., age 35, passed away unexpectedly on Monday, October 30, 2017 at his residence. Born in Dover, Joe graduated from West Milford High School in 1999 and been a Sussex County resident for the past 9 years. He... View Obituary & Service Information

The family of Joseph A. Szczesny Jr. created this Life Tributes page to make it easy to share your memories.

Send flowers to the Szczesny family.