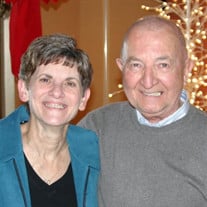 Hamburg - Joseph Franek, age 88, peacefully passed away on Wednesday, February 6, 2019 at his residence while surrounded by his loving family. Born in Clarence, Pennsylvania to the late Joseph and Agnes (Mihalik) Franek, Joseph had lived in New York City for 25 years before moving to Hamburg in 1976. Mr. Franek had served in the United States Army; moved directly to work for the National Security Administration upon his discharge. Over his lifetime, he owned several small grocery store businesses in NYC. Much of his professional lifetime was devoted to large scale baking businesses throughout the U.S. He was employed by American Bakeries Inc. as Superintendent in NYC, Plant Manager for Northeast Foods Inc., Edison, NJ. Upon retirement in 1996, he started a new workplace safety business, Safeway; a business that thrives today under leadership of his son, Michael. Mr. Franek is author of four books of both fiction and non. A selection of his writings can be accessed at http://www.thoughtsonthethreshold.org, a site he actively maintained. He was a member of St. Jude The Apostle Church in Hamburg, an avid fisherman and gifted golfer. Mr. Franek was predeceased by his brother, Robert Franek, and his first wife, Victoria (Papio). He is survived by his loving wife of 48 years, Lorraine (Della Volpe); his sons, Joseph S. and his wife, Christine, of North Carolina, Michael and his wife, Josephine, of Bronx, New York, Robert and his husband, Mario Lopez-Cordero, of New York, New York, and Thomas and his wife, Angela, of Dunmore, Pennsylvania; his daughter, Lori Ann Franek, of Brooklyn, New York; his brothers, Frank of Montoursville, Pennsylvania, John and his wife, Anne, of Clarence, Pennsylvania, Andrew and his wife, Diana of Clarence, Pennsylvania, and David and his wife, Carol, of Washington, DC; his sisters, Cecelia Hoover of Snowshoe, Pennsylvania and Doris Cook of Pine Glen, Pennsylvania; five grandchildren; and two great grandchildren. Mass of Christian Burial will be held at 10 a.m. on Monday, February 11, 2019 at St. Jude The Apostle Church, Beaver Run Road, Hamburg. Private cremation services will be held at the convenience of the family. Friends may pay their respects to the family from 2 to 7 p.m. on Sunday, February 10, 2019 at the Pinkel Funeral Home, 31 Bank Street (Route 23), Sussex. In lieu of flowers, memorial donations may be made in Joseph Franek's memory to Karen Ann Quinlan Center, 99 Sparta Avenue, Newton, NJ 07461. Online condolences may be offered to the family at www.pinkelfuneralhome.com

Hamburg - Joseph Franek, age 88, peacefully passed away on Wednesday, February 6, 2019 at his residence while surrounded by his loving family. Born in Clarence, Pennsylvania to the late Joseph and Agnes (Mihalik) Franek, Joseph had lived in... View Obituary & Service Information

The family of Joseph M. Franek created this Life Tributes page to make it easy to share your memories.

Send flowers to the Franek family.