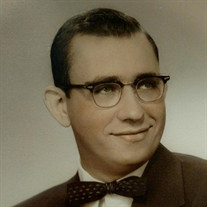 Joseph Friedrich Appel, 84, passed away peacefully at the home of his daughters Andrea Smith and Stephanie Appel in Maryville, Tennessee on November 9, 2020. Born in Paterson, New Jersey in 1935, Joe spent his formative years with his parents Ernest and Karla Appel, his brother Charlie and his sister Barbara in in North Haledon, New Jersey. The family also spent the summer months at a small house near Lake Pochung in Vernon Township. This is how he would come to meet his future wife Jessica Little even before he had begun kindergarten. Following his older brother’s lead, Joe attended and graduated from LaSalle Military Academy in Oakdale, New York in 1954. He continued his studies at Manhattan College, graduating with a BS degree from the School of Arts and Science in 1958. He went on to serve in the US Army from 1959 to 1961. After basic training in New Jersey, he was placed with the 4th Ordnance Company of White Sands, New Mexico in Miesau, Germany, where rocket repair was the focus. His two years of service provided him time to travel to many European countries, although not Czechoslovakia, the native country of his parents’ families. Upon returning to civilian life, Joe joined US Customs in the mailroom of the Alexander Hamilton Customs House at 1 Bowling Green in lower Manhattan. When he retired after 25 years of service in 1987, he managed the import of arts and antiquities out of the “new” Custom House located at 6 World Trade Center. Joe married Jessica Campbell Little at St. Monica’s Catholic Church in Sussex, New Jersey on July 8, 1967. It was the first wedding performed on the altar of that church between a Catholic and a non-Catholic after Vatican II. Together the couple built their home on some land that had been a part of the Little Family Farm, along Route 565 near Sussex, New Jersey. A workaholic who enjoyed being outside more than sitting behind a desk, Joe and his wife had a small vegetable farm. In later years, the focus switched to tree nurseries and the sale of firewood. Throughout his life, he was well known for building (and re-building) New England-style stone walls using raw materials from the property. In his downtime, he loved crossword puzzles, classical music, Yankee’s baseball, and any type of media on world history and science fiction. He is survived by his wife of fifty-three years, Jessica L. Appel of Maryville, Tennessee; a daughter Courtney Sadler (Jim) of Parker, Colorado; daughters Andrea Smith (Jeff) and Stephanie Appel of Maryville, Tennessee; four grandchildren Matthew, Jacob, Sarah and Joseph Sadler; two sister-in-laws, Mary Appel of Nutley, New Jersey and Irene Little of Newton, New Jersey; and many beloved nieces and nephews on three continents. After the threat of COVID subsides, the family will have a Mass of Christian Burial at St. Monica R.C. Church in 2021 for family and friends with an interment at Deckertown-Union Cemetery in Wantage. Suggested memorial donations can be made to any of the following organizations: Friends of Wallkill River National Wildlife Refuge (www.friendsofwallkillriver.org); Covenant House New Jersey (covenanthousenj.org) or the Michael J. Fox Parkinson’s Foundation (www.michaeljfox.org). Online condolences may be offered to the family on www.pinkelfuneralhome.com

Joseph Friedrich Appel, 84, passed away peacefully at the home of his daughters Andrea Smith and Stephanie Appel in Maryville, Tennessee on November 9, 2020. Born in Paterson, New Jersey in 1935, Joe spent his formative years with his parents... View Obituary & Service Information

The family of Joseph Friedrich Appel created this Life Tributes page to make it easy to share your memories.

Joseph Friedrich Appel, 84, passed away peacefully at the home...

Send flowers to the Appel family.