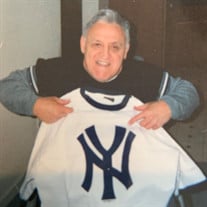 Montague - John J. McDonough, Sr., age 85, passed away on Monday, November 16, 2020 at Bon Secours Community Hospital in Port Jervis, New York. Born in Sussex to the late Martin and Margaret (Allecca) McDonough, John had lived in Sussex County all of his life. Mr. McDonough had been self-employed, owning an operating his own insurance agency before his retirement. Besides his parents, he was predeceased by his grandson, Martin McDonough, Jr.. Mr. McDonough is survived by his loving wife of 61 years, Betty Jean (Kays); his sons, John , Jr. and his wife Peggy of Port Murray, Martin and his wife Suzanne, and Robert and his wife Lisa of Milford, PA; his daughter, Michelle Sullivan of Milford, PA; his sister, Deanna Grad of Bayside, New York; twelve grandchildren; six great grandchildren; and many nieces and nephews that adored him. Mass of Christian Burial will be offered at 10 a.m. on Saturday, November 21, 2020 at St. Mary’s Church, 50 Ball Street, Port Jervis, New York. Private cremation services will follow. In lieu of flowers, the family requests that memorial donations may be made in John's memory to St. Judes Children’s Research Hospital, 501 St. Jude Place, Memphis, TN 38105. . Funeral arrangements have been entrusted to the Pinkel Funeral Home, 31 Bank Street (Route 23), Sussex. Online condolences may be offered to the family at www.pinkelfuneralhome.com

The family of John J McDonough Sr. created this Life Tributes page to make it easy to share your memories.

Send flowers to the McDonough family.