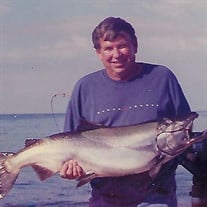 Wantage - John J. Little, age 75, passed away on Thursday, November 14, 2019 at his residence after a short illness. Born in Sussex to the late Nathaniel and Helen (Park) Little, John graduated from Sussex High School in 1962 and had lived in the Sussex-Wantage area all of his life. He served in the United States Army in Thailand during the Vietnam Era. John had been employed for over 30 years as a lineman for Jersey Central Power and Light in Morristown before his retirement. John enjoyed gardening, hunting, woodworking, fishing, traveling, and spending time with his cherished friends, family, and neighbors. Besides his parents, he was predeceased by his brother, George Little in 2014. He is survived by his daughters, Ronni L. Love and her husband Jeff of Fairfield, CT and Denise Woods and her husband John of Saddle River; his son, Richard Little and his wife Lisa of Lexington, KY; his brother, Donald Little of Walden, NY; his grandchildren, Maggie, Gracie, Gigi, Johnathan, Ryan, Jack, John Robert, Maggie, Sean, Lea, Jack, and Samantha; his former wife, Veronica Little of Wantage; his sister-in-law, Katherine Little of Sussex; and his nieces and nephews, Perry Little, Wayne Little and Wendy Kovach; and his beloved dog, Buddy. Funeral services will be held at 11:30 a.m. on Monday, November 18, 2019 at the Pinkel Funeral Home, 31 Bank Street (Route 23), Sussex, NJ. Interment to follow at Beemerville Cemetery in Wantage. Friends may pay their respects to the family on Monday prior to the service from 10 a.m. to 11:30 a.m. at the funeral home. In lieu of flowers, the family request that memorial donations may be made in John Little’s memory to the Wounded Warrior Project, P.O. Box 758516, Topeka, Kansas 66675-8516. Online condolences may be offered to the family at www.pinkelfuneralhome.com.

Wantage - John J. Little, age 75, passed away on Thursday, November 14, 2019 at his residence after a short illness. Born in Sussex to the late Nathaniel and Helen (Park) Little, John graduated from Sussex High School in 1962 and had lived... View Obituary & Service Information

The family of John J. Little created this Life Tributes page to make it easy to share your memories.

Send flowers to the Little family.