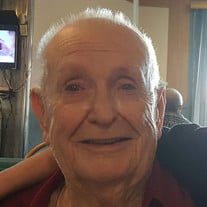 Toms River Township - John R. Gillis, age 88, passed away on Thursday, May 4, 2017 at Hampton Ridge Healthcare and Rehabilitation Center in Toms River Township. Born in Bayonne to the late James A. and Minnie (Gregg) Gillis, John lived in Sussex County before moving to Toms River Township in 1996. He had served in the United States Army during the Korean War. John had retired from Alcatel-Lucent in Chester, New York as a laboratory technician 23 years ago. He was a 64 year member of the American Legion Post 213 in Wantage, a former member of the Colesville Fire Department and the Blue Ridge Beagle Club, and was one of the founding members of the Lucky Seven Gun Club of Wantage. John enjoyed spending his summer months camping and had a passion for building and racing race cars, which included stock cars and go carts. He was predeceased by his wife, Irene M. (Dennis) Gillis in 1997 and his two brothers, James Gillis in 1988 and George Gillis in 2004. John is survived by his nieces, Kathy Gillis-Ortiz and her husband Agustin ('gus) of Stafford, VA and Ann Gillis-Letterio and her husband Albert of Port Charlotte, Florida and his nephews, George Gillis and his wife Linda of Hamburg, James Gillis of St. Petersburg, Florida, and John Gillis of Wantage. Graveside funeral services will be held at 11 a.m. on Monday, May 8, 2017 at Clove Cemetery in Wantage. Funeral arrangements have been entrusted to the Pinkel Funeral Home, 31 Bank Street (Route 23), Sussex. In lieu of flowers, the family requests that memorial donations may be made to American Legion Post 213, P.O. Box 447,Sussex, NJ 07461. Online condolences may be offered to the family at www.pinkelfuneralhome.com

The family of John R. Gillis created this Life Tributes page to make it easy to share your memories.

Send flowers to the Gillis family.