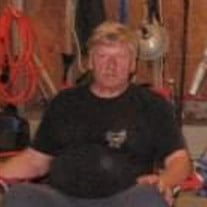 Sussex - John Bocsusis, age 74, passed away on Monday, November 1, 2021 at Kaplan Family Hospice in Newburgh, New York. Born in Brooklyn, New York on July 17, 1947, to the late Peter and Theresa “Tessie” (Hoban) Bocsusis, John grew up in Sussex and lived in Unionville, New York for many years. He had served in the United States Navy during the Vietnam Era. John had been a self-employed tree climber. Besides his parents, he was predeceased by his step-father, Frank Mracek, Jr. on February 19, 2021. John is survived by his daughter, Michelle Bocsusis, her fiance, Dale Guidone, and her son, Keain, great grandson, Zayden, and her children, Dakota, Destiny, Makayla, Annalyse, and Jade and her children, Elina and Aiven; his daughter, Dawn Bocsusis Brune, her husband Chris and her children, Priscilla, Colin, and Celeste of Irving, California; his sisters, Corinne Bocsusis of Middletown, New York and Mary Bocsusis Banks of Fort Mill, South Carolina; his brothers, George Bocsusis and his wife Karen of Gandeeville, West Virginia and Gary Dunn and his wife Helen of Westtown, New York; and many nieces and nephews. Family may pay their respects on Sunday, November 14, 2021 from 2 p.m. to 4 p.m. at the Pinkel Funeral Home, 31 Bank Street, (Route 23), Sussex. Memorial services will immediately follow at 4 p.m. at the Pinkel Funeral Home, 31 Bank Street (Route 23), Sussex. In lieu of flowers, please consider a memorial donation in John’s memory to an animal or nature charity. Online condolences may be offered to the family at www.pinkelfuneralhome.com

The family of John Bocsusis created this Life Tributes page to make it easy to share your memories.

Send flowers to the Bocsusis family.