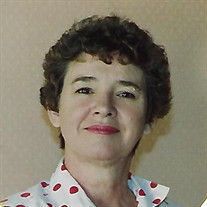 Wantage - Johanna Kacmar, age 82, peacefully passed away on Saturday, March 16, 2019 at her home. Born in Paterson to the late William Kern and Valmai (Morgan) Kemp, Mrs. Kacmar lived in Pompton Lakes before moving to Sussex County in 2004. She attended the First Presbyterian Church of Sussex, was a past Girl Scouts leader, and was a former member of the Pompton Reformed Church in Pompton Lakes, where she served as an Elder and Deacon. Mrs. Kacmar was predeceased by her granddaughter, Morgan DeHaan; her great granddaughter, Hanna DeHaan; and her sister, Karoline Kern Little. She is survived by her husband of 46 years, Stephen; her sons, William Maxwell and his wife Cathy of Hampton, David Maxwell of Millsboro, Delaware, and Scott Maxwell and his wife Cath of Bloomingdale, Stephen Kacmar of Holland, Michigan, Gregory Kacmar of Nevada, and Russell Kacmar and his wife Nancy of West Milford; her daughters, Barbara Maxwell Reid and her husband David of West Warwick, Rhode Island and Kelly Jo Mobius and her husband Dodd of Rehoboth Beach, Delaware; twelve grandchildren; and six great grandchildren. Funeral services will be held at 7 p.m. on Thursday, March 21, 2019 at the Pinkel Funeral Home, 31 Bank Street (Route 23), Sussex. Friends may pay their respects to the family prior to the service from 5 p.m. to 7 p.m. at the funeral home. Private cremation services will be held at the convenience of the family. In lieu of flowers, the family requests that memorial donations may be made in Johanna Kacmar's memory to Karen Ann Quinlan Center of Hope Hospice, 99 Sparta Avenue, Newton, NJ 07860. Online condolences may be offered to the family at www.pinkelfuneralhome.com

The family of Johanna Kacmar created this Life Tributes page to make it easy to share your memories.

Send flowers to the Kacmar family.