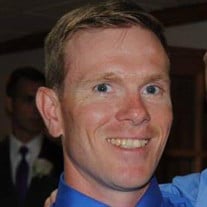 Jesse H. Dunn, age 38, died unexpectedly on Saturday, May 25, 2019. Born in Newton, NJ on December 29, 1980, Jesse lived with his family in Unionville, NY. He was a 1999 graduate of Minisink Valley High School. Jesse worked for Crystal Run Village in Middletown, New York as an Assistant Director of Facilities and was due to graduate on June 13th for a degree in Facility Management. He was a devoted father, son, brother, and friend to many people. He was an avid supporter of his children’s activities and sports teams. He was a coach for Port Jervis Minor Little League. His children were his whole world!! Jesse enjoyed being with family and friends and riding his motorcycle. Jesse was a kind, generous, and compassionate person who was always ready to help others. He always had a beautiful smile on his face. He was the kindest and most caring person around. He would do anything for anybody. Jesse is survived by his loving parents, John and Sherry (Doyle) Dunn; his children, Riley Courtney and Justin Henry; and his brother, Jason. He is also survived by his girlfriend, Jennifer Spangenburg and her children, Jayden, Rowan, and Evelyn, and their soon to be daughter; his former wife, Kristin Savage; and many aunts, uncles, cousins, and dear friends. Jesse was predeceased by his sister, Courtney on March 25, 1995; his maternal grandparents, Ernest and Marie Doyle; and his paternal grandparents, John H. and Laura Dunn. A life well lived is a legacy of joy, pride, and pleasure. Having Jesse in our lives for 38 years was a blessing! He will live in all our hearts and memories forever! He is a star who will always continue to shine!! Friends may pay their respects to the family on Thursday, May 30, 2019 from 2-4 and 7 -9 p.m. at the Pinkel Funeral Home, 31 Bank Street (Route 23), Sussex. Funeral services will be held at 11 a.m. on Friday, May 31 at the Pinkel Funeral Home, 31 Bank Street (Route 23), Sussex. Private inurnment of Jesse’s ashes with his sister, Courtney, will be held at the convenience of the family. In lieu of flowers, the family requests that memorial donations may be made in Jesse’s memory to a fund set up for the children’s future education, c/o Pinkel Funeral Home, 31 Bank Street, Sussex, NJ 07461. Online condolences may be offered to the family at www.pinkelfuneralhome.com

The family of Jesse H. Dunn created this Life Tributes page to make it easy to share your memories.

Send flowers to the Dunn family.