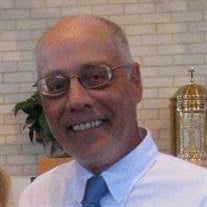 Wantage - Jeffrey M. Veltri, age 57, unexpectedly passed away on Tuesday, December 25, 2018. Born in Passaic to the late Daniel and Esther Veltri, Jeffrey lived in Lodi before moving to Sussex County 30 years ago. He had been employed by Kings Supermarket in West Caldwell and was currently the Manager for Shop-Rite Supermarket in West Orange. Mr. Veltri had been with Shop Rite Supermarkets for over 30 years. He was a member of St. Monica R.C. Church in Sussex and the Sussex Elks. Mr. Veltri was an avid Devils, Packers and Yankees fan. Besides his parents, Mr. Veltri was predeceased by his beloved daughter, Kristen Ann Veltri on March 13, 2012. He is survived by his loving wife of 35 years, Wieslawa “Vicky” (Getek); his son, Jeffrey D. Veltri and his wife Nicole of Sparta; his daughter, Jessica L. Veltri of Wantage; his brothers, Daniel Veltri and his wife Suzanne of Arizona, Lawrence Veltri and his wife Mary Ann of Little Egg Harbor, and Anthony Veltri and his wife Patricia of Moonachie; his sister, Jean Veltri of Lodi; his nieces and nephews, Gregory, Christopher, Laura, Anthony, Matthew, and Diane; his in-laws, Hannah and John, Krys and Michael, Janina and Stanley, and Ursula and Anthony; and their families, Robert, Michael, Thomas, Renee, Barbara, Sam, Jeannie, Eileen, Matthew, Alyssa, Gregory, Danielle, and Zackary; and many cousins. Mass of Christian Burial will be offered at 9:30 a.m. on Saturday, December 29, 2018 at St. Monica R.C. Church, 33 Unionville Avenue, Sussex. Interment will follow at Gate of Heaven Cemetery in East Hanover. Friends may pay their respects to the family on Friday, December 28, 2018 from 2-4 to 7-9 p.m. at the Pinkel Funeral Home, 31 Bank Street (Route 23), Sussex. Online condolences may be offered to the family at www.pinkelfuneralhome.com

Wantage - Jeffrey M. Veltri, age 57, unexpectedly passed away on Tuesday, December 25, 2018. Born in Passaic to the late Daniel and Esther Veltri, Jeffrey lived in Lodi before moving to Sussex County 30 years ago. He had been employed by... View Obituary & Service Information

The family of Jeffrey M. Veltri created this Life Tributes page to make it easy to share your memories.

Send flowers to the Veltri family.