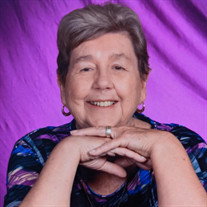 Wantage - Janet A. Holczer, age 82, peacefully passed away at Karen Ann Quinlan Home for Hospice in Fredon on Monday, June 21, 2021. Born at Franklin Hospital in Franklin, NJ on December 16, 1938 to the late Royce and Lena (Raymond) Cortright. Despite having lived in Sussex County all of her life, Janet traveled extensively throughout Europe with her sister-in-law Margaret Holczer. She had been employed at Ames Rubber Corp. in Hamburg and retired in 2003. She also was a waitress at The Playboy Club from 1972-1981 where she waited on many famous celebrity's like Sammy Davis, Jr. and Muhammad Ali, just to name a few. She was a member of St. Francis de Sales R.C. Church in Vernon and St. Monica R.C. Church in Sussex. Janet was an active member of the Vernon Senior Group, Greenville Senior Group and the Columbiettes at St. Francis de Sales R.C. Church. Besides her parents, Janet was predeceased by her husband, Stefan on November 21, 1991. She is survived by her daughter, Linda Artigliere and her husband John of Ogdensburg; her brothers, Ralph Cortright of Sussex and Robert Cortright of North Carolina; her sister, Mary Brandt of New Port Richie, Florida; two grandchildren, Ryan and his wife Alison Artigliere of Middlefield, CT and Caitlin and her husband Christopher Conklin of San Diego CA; and her great granddaughter, Ava Jacquelyn Artigliere. Mass of Christian burial will be held at 11 a.m. on Thursday, June 24, 2021 at St. Monica R.C. Church, 33 Unionville Avenue, Sussex. A private interment will follow at North Hardyston Cemetery. Family may pay their respects on Thursday one hour prior to the mass from 10 a.m. to 11 a.m. at the church. In lieu of flowers, please consider a memorial donation in Janet’s memory to Karen Ann Quinlan Center of Hope Hospice, 99 Sparta Avenue, Newton, NJ 07860. Funeral arrangements have been entrusted to the Pinkel Funeral Home, 31 Bank Street (Route 23), Sussex. Online condolences may be offered to the family at www.pinkelfuneralhome.com

The family of Janet A. Holczer created this Life Tributes page to make it easy to share your memories.

Wantage - Janet A. Holczer, age 82, peacefully passed away at...

Send flowers to the Holczer family.