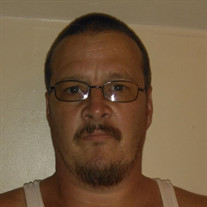 Newton - James Walter Ziniewicz, age 43, unexpectedly passed away on Monday, August 5, 2019 from injuries sustained for a motor vehicle accident. Born and raised in Mobile, Alabama, James moved to Sussex County in 1995. While living in Alabama, he worked on oil rigs. He was a jack of all trades and was able to do anything. He was especially a neat freak. While living in New Jersey, James worked in fast food, building bridges, and worked as a CNA Aide. He enjoyed life and was very kind hearted, friendly, and out going. James would do anything for anyone and give his shirt off his back for them. He truly enjoyed having BBQ’s with family and friends. He loved to cook, read books, camp, and travel. James visited Atlantic City often. He also enjoyed going to his mother’s companion’s farm in Warwick, New York and liked to help around the farm. James was a huge fan of “Fast and Furious” and most of all enjoyed playing the game, “World of Warcraft.” James would stay up for hours and days playing that game. He is survived by his mother, Dixie A. Baird of Newton and her companion, Allen Baird of Warwick, New York; his father, Al Ziniewicz from South Jersey; his sister, Jessica Ziniewicz of Franklin; his brother, Thomas Ziniewicz of Franklin; two nephews, Reyes and Matthew and his wife Sarah and their son, Matthew, Jr.; his paternal grandfather, Pete McCarthy; his “second mom,” Linda Edsel of Newton; one uncle; eight aunts; many cousins, and lots of good friends. Funeral services will be held at 7 p.m. on Tuesday, August 20, 2019 at the Pinkel Funeral Home, 31 Bank Street (Route 23), Sussex. Friends may pay their respects to the family one hours prior to the service from 6 p.m. to 7 p.m. at the funeral home. Online condolences may be offered to the family at www.pinkelfuneralhome.com.

The family of James Walter Ziniewicz created this Life Tributes page to make it easy to share your memories.

Send flowers to the Ziniewicz family.