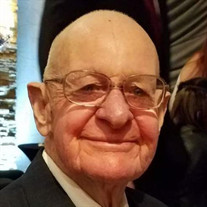 Wantage - James T. Gallichio, Sr. age 86, passed away on Monday, October 8, 2018 at his residence while surrounded by his loving family. Born in the Coney Island area of Brooklyn, New York to the late John T. and Emily Gallichio, he lived in Clifton before moving to Sussex County in 1999. He served in the United States Army during the Vietnam War. Mr. Gallichio worked as a heavy equipment operator for Mikula’s Contracting in Clifton from 1968 to 1975. In 1975, Mr. Gallichio started his employment at the City of Clifton in the Department of Public Works, where he retired from in 1994. Mr. Gallichio was predeceased by his siblings, Angelo Gallichio, Theodore Gallichio, Agnes Galliano, and Frederick Hanley. He is survived by his wife of 58 years, Anna (Boenisch); his three sons, James Gallichio and his wife Lisa of Clifton, Marc Gallichio and his wife Gina of Clifton, and Richard Gallichio and his wife Sylvia of Wantage; his daughter, Diane Curto and her husband Alexander of Wantage; his sister, Louise Marino and her husband John of Florida; his 12 grandchildren, Keith and Samantha Gallichio, Heather Bucklin, Kristen Bucklin, Megan Gallichio, Melanie Gallichio, Jay Gallichio, Christopher and Kristin Gallichio, Tiffany Gallichio, Kelly Gallichio, Robert Adamo, Brian Adamo, and Joseph Adamo; and his 13 great grandchildren . Funeral Services will be held at 3:30 p.m. on Friday, October 12, 2018 at the Pinkel Funeral Home, 31 Bank Street (Route 23), Sussex. Friends may pay their respects to the family on Friday from 2 p.m to 3:30 p.m. and 7-9 p.m. at the funeral home. Interment at the Northern New Jersey Veterans Memorial Cemetery will be held at 11 a.m. on Monday, October 15, 2018. In lieu of flowers, the family requests that memorial donations be made to Compassionate Care Hospice, 350 Sparta Avenue, Suite B2, Sparta. NJ 07827. Online condolences may be offered to the family at www.pinkelfuneralhome.com

Wantage - James T. Gallichio, Sr. age 86, passed away on Monday, October 8, 2018 at his residence while surrounded by his loving family. Born in the Coney Island area of Brooklyn, New York to the late John T. and Emily Gallichio, he lived in... View Obituary & Service Information

The family of James T. Gallichio Sr. created this Life Tributes page to make it easy to share your memories.

Send flowers to the Gallichio family.