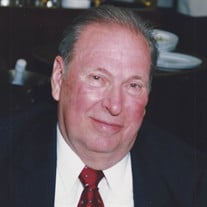 Wantage - Jack F. Hingel, age 89, passed away on Tuesday, September 26, 2017 at Newton Medical Center while surrounded by his loving family. Born in Paterson to the late Nicholas and Eva (Loch) Hingel, Jack lived in Bloomfield before moving to Sussex County in 2006. He had been employed as an office manager for Shering Plough Corp. and retired from their Kenilworth location approximately 30 years ago. Mr. Hingel was a member of St. Monica R.C. Church in Sussex and belonged to their Leisure Group. He also was a member of St. Jude’s Senior Group, the Frankford Seniors, the Sussex Over 50 Club, and a Fourth Degree member of the Bloomfield Knights of Columbus No. 1178. Jack loved polka music and enjoyed attending Oktoberfest festivals with his family and friends. Mr. Hingel was predeceased by his wife of 69 years, Mary Ann “Mitzi” Hingel on July 28, 2017; his sister, Elizabeth “Deedee” Maier in 2011 and her husband Willibald “Willi” Maier in 2013, his grandson, Christopher Donnelly in 1984 and his son-in-law, Michael Donnelly in 2000. Mr. Hingel is survived by his three daughters, Betty Donnelly of Newton, Barbara Valliere and her husband Ted of Wantage, and Cathy Kratzsch and her husband Chip of Newton; six grandchildren, Thomas "TJ," David, Brian, Ashley, Erik, and Mackenzie; and his great grandchildren, Michele, Skyler, and Riya. Funeral services will be held at 9:30 a.m. at the Pinkel Funeral Home, 31 Bank Street (Route 23), Sussex on Monday, October 2, 2017. Mass of Christian Burial will follow at 10 a.m. at St. Monica R.C. Church, 33 Unionville Avenue, Sussex. Friends may pay their respects to the family on Sunday, October 1, 2017 from 2-4 and 7-9 p.m. at the funeral home. Private cremation services will be held at the convenience of the family. In lieu of flowers, the family requests that memorial donations may be made to Karen Ann Quinlan Center of Hope Hospice, 99 Sparta Avenue, Newton, NJ 07860. Online condolences may be offered to the family on www.pinkelfuneralhome.com

The family of Jack F. Hingel created this Life Tributes page to make it easy to share your memories.

Send flowers to the Hingel family.