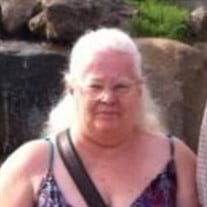 Walden - Imogene “Genie” Babb Shorter, age 73, passed away on Sunday, March 15, 2020 at orange Regional Medical Center in Middletown, New York. Born in Goshen, New York, Genie graduated from Pine Bush Central High School and had lived in Virginia before moving back to Orange County, New York area. She had been employed in the medical billing department for Blue Cross/Blue Shield in Middletown, New York for many years before her retirement. Mrs. Shorter had been a member of the First Reformed Church in Walden and was active in their choir and served as their Administrator Support. She was a member of the International Order of the Rainbow for Girls. She was predeceased by her parents, Jessi W. Babb and Imogene Babb. Genie is survived by her husband of 32 years, Samuel Shorter, Jr.; her three sons, Samuel, III, John, and Robert; and her daughter, Arlene. Private cremation services have been entrusted to the Pinkel Funeral Home, 31 Bank Street (Route 23), Sussex, NJ. A memorial service will be held at 3 p.m. on Saturday, October 17, 2020 at the First Reformed Church Walden, 70 Scofield Street, Walden NY 12586. Online condolences may be offered to the family at www.pinkelfuneralhome.com

The family of Imogene "Genie" Babb Shorter created this Life Tributes page to make it easy to share your memories.

Send flowers to the Shorter family.