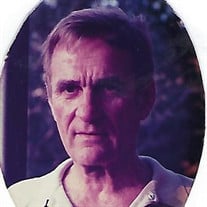 Igor Jaworowsky, 87 years old, peacefully passed away on Friday, June 29, 2018 at the Preakness Healthcare Center in Wayne, NJ. He was born in Lviv, Ukraine to Theophil Jaworowsky and his wife Henrietta, nee Holtz. At the age of 19, he emigrated to America with his parents and two sisters, Irene and Vera, both of whom have pre-deceased him. During the Korean War, he served in the Army for two years, primarily in England, where his talents as a sharpshooter quickly became evident. As a result, he was often sent on tour to represent the Army during many competitive meets as a skilled sharpshooter. Following discharge and after years of difficult work while making less than a dollar an hour, he managed to save up enough money to buy a six-unit apartment building in Clifton to house five additional families that had also emigrated from the Ukraine. Igor eventually became a Plumbing Contractor and set up his own business, Columbia Plumbing. A hard worker, and gifted with creative solutions to thorny plumbing problems, he soon became known as the guy who would tackle the difficult jobs that others couldn't handle. For most of his working years, Igor and his first wife Zina who predeceased him, lived in the Branchville area, where they raised their four children: George, Walter, Paula, and Andrew. The game of chess had fascinated Igor for many years and after countless nights and weekends of dedicated study and practice, he entered a number of tournaments and became a rated player. Even after dementia recently began to arrive, he remained a demon chess player and rarely lost a game. Along the way, Igor became deeply interested in the problem of dry wells that had formerly produced sufficient water for both commercial and residential use but were no longer functioning. He figured there had to be a safe way to get those wells producing water again, and after a few years of extensive research, he came up with an ingenious solution: he injected frozen CO2 into the rocks deep beneath the surface which caused them to expand and crack, thus freeing up the water flow once again. The method was environmentally safe, relatively inexpensive, and virtually always did the job. He acquired two patents for the process, and founded his company which he appropriately named Aqua Freed. Years later, he sold the company and it is very much in business today, solving scarce water problems all over the world. Closer to home, Igor owned The Natural Health Food Store in Franklin for thirteen years. Igor was proud of his Ukrainian heritage and never overlooked any opportunity to honor the country of his birth. But he also became an extremely proud, fully assimilated American citizen who very much admired our unique form of governance. As an American, he was grateful for the many opportunities he had to achieve his dreams and build an exceedingly worthy life for himself and his family. Igor leaves his beloved wife of 25 years, Sue Speck of Vernon; his four children, George of Florida, Walter of New York, Paula Hepponstall of Franklin Lakes, and Andrew of New York; eight grandchildren; and five great-grandchildren. He served his two countries well . . . may his Memory be Eternal. Viewing will be held from 5 to 7 p.m. on Friday, July 6, 2018 at Holy Spirit Orthodox Church, 102 State Route 284, Wantage. Funeral service will be 9 a.m. on Saturday, July 7, 2018 at Holy Spirit Orthodox Church. Interment to follow on Saturday at The Orthodox Monastery of Saint Tikhon of Zadonsk in South Canaan, PA. Funeral services are under the direction of the Pinkel Funeral Home, 31 Bank Street (Route 23), Sussex. Information and online condolences may be offered to the family at www.pinkelfuneralhome.com.

Igor Jaworowsky, 87 years old, peacefully passed away on Friday, June 29, 2018 at the Preakness Healthcare Center in Wayne, NJ. He was born in Lviv, Ukraine to Theophil Jaworowsky and his wife Henrietta, nee Holtz. At the age of 19, he emigrated... View Obituary & Service Information

The family of Igor Jaworowsky created this Life Tributes page to make it easy to share your memories.

Send flowers to the Jaworowsky family.