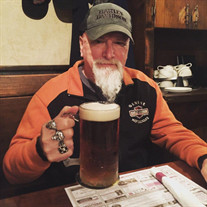 Wantage - Howard M. Embleton, age 73, passed away on Monday, April 13, 2020 at Care One in Morristown. Born in Jersey City to the late LeRoy “Roy” and Margaret (Popowich) Embleton, Howard grew up in Bergenfield and moved to Sussex County in 1972. He had been a science teacher at the former Franklin High School since 1968 and when Wallkill Valley High School opened, Howard taught at the school from 1982 until his retirement in 2001. After his retirement, he became the parts manager for Tramontin Motorcycles in Hope and then Legends in Ledgewood. Howard was an avid Motorcycle enthusiast and was a member of North Jersey Riders. He also enjoyed his time playing and singing in the band, The Mudsharks for 30 years. Howard had an antique shop in Andover and was a huge collector and restorer of old phonographs. He also enjoyed woodcarving and was known for his carved Santa Claus figures. He is survived by his wife of 50 years, Marjorie (Gibbs); his son, Michael Embleton and his wife Joy of Sparta; his daughter, Suzanne Embleton and her companion Curtis Charles of Fort Lee; his brother, Roy T. Embleton of Nanuet, New York; his sister, Karen Valido and her husband Rick of Dumont; his three grandchildren, Josie, Cameron, and Saje; and his nephews, Ryan, Travis, and Scott. Due to the government health restrictions, funeral services and burial were held privately for the family and a memorial service and celebration of Howard’s life will be held at a later date. Please check the funeral home website and the New Jersey Herald for updated information. In lieu of flowers, the family requests that memorial donations may be made in Howards’s memory to the Alzheimer’s Association, 225 N. Michigan Ave., Fl. 17, Chicago, IL 60601. Funeral arrangements have been entrusted to the Pinkel Funeral Home, 31 Bank Street (Route 23), Sussex. Online condolences may be offered to the family at www.pinkelfuneralhome.com

Wantage - Howard M. Embleton, age 73, passed away on Monday, April 13, 2020 at Care One in Morristown. Born in Jersey City to the late LeRoy &#8220;Roy&#8221; and Margaret (Popowich) Embleton, Howard grew up in Bergenfield and moved to Sussex... View Obituary & Service Information

Send flowers to the Embleton family.