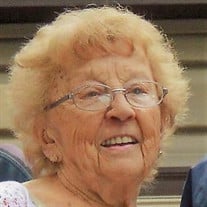 Hamburg - Hedy F. Royko, age 91, formally of Wayne, passed away on Wednesday, April 4, 2018 at Newton Medical Center. Born in Little Ferry to the late John and Hedy (Polachek) Kratochvil, Hedy lived in Binghamton, New York and then Wayne before moving to Hamburg 11 years ago. She worked for GAF/ISP Corporation, handling all forms control and later as an expediter in the purchasing department. After 27 years of service, she retired in 1997. While living in Binghamton, Hedy was active in the church choir at Holy Spirit R.C. Church. She was a former parishioner of the "Annunciation Church" of the Blessed Virgin Mary in Wayne and served as an eucharistic minister since 1978. After moving to Hamburg, Hedy joined St. Jude The Apostle Church. Hedy was a leader in Girl Scouts and a Brownie Troop and was in charge of Girl Scout cookies. She was a great athlete. She was a runner and won various contests, was a great bowler, beating her husband many times. Hedy and her late husband Joe enjoyed traveling together. They visited all 50 states and flew to 17 European countries. Hedy and Joe celebrated their 50th wedding anniversary on August 23, 1998. Her husband, Joseph predeceased her in 2006. Hedy was also predeceased by a daughter, Theresa Kaetzel in 2010 and her sister, Marie May in 2018. She is survived by her daughters, Janet Royko of Dingmans Ferry, PA, Kathleen Garrett and her husband Ron of Hamburg, Patricia Hreha and her husband Albert of Wayne, and Joann Salvatore of Newtown, PA; eleven grandchildren, Michelle, Kevin, Bryan, Chris, Tim, Dan, Kimberly, Allison, Jeremy, Nicole, and Karen; and twelve great grandchildren. Funeral services will be held at 8:45 a.m. on Monday, April 16, 2018 at the Pinkel Funeral Home, 31 Bank Street (Route 23), Sussex. Mass of Christian Burial will follow at 9:30 a.m. at St. Jude The Apostle Church, Beaver Run Road, Hamburg, NJ 07419. Interment Brigadier General William C. Doyle Veterans Memorial Cemetery in Wrightstown. Friends may pay their respects to the family on Sunday, April 15, 2018 from 2-5 p.m at the funeral home. In lieu of flowers, the family requests that memorial donations may be made to the Alzheimers Foundation of America, 322 Eighth Avenue, 7th Floor, NY, NY 10001. Online condolences may be offered to the family at www.pinkelfuneralhome.com

The family of Hedy F. Royko created this Life Tributes page to make it easy to share your memories.

Send flowers to the Royko family.