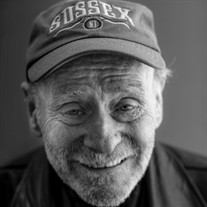 Sussex - Harry Nasse, age 84, a long-time resident of Sussex, New Jersey, died at his home on Friday, October 26, 2018 while in the care of his daughter. He served in the United States Army from 1956 to 1961. Mr. Nasse received his Bachelor of Art degree from MassArt in Boston, MA and earned his Masters Degree in Fine Arts from Syracuse University. Mr. Nasse purchased the building at 35 Main Street in Sussex in 1987. There he established Matte Frames (a picture-framing business), a storefront art gallery, and his residence on the second floor. Mr. Nasse was a well-established art gallerist and founded the artist-run cooperative Ward-Nasse Gallery after years of directing galleries at various locations in Boston, MA. He brought the Ward-Nasse Gallery to the SoHo district of New York City in 1969 and was dedicated to serving artists, collectors and anyone interested in contemporary art. The gallery was a fixture in SoHo until 2017 when the gallery moved to its current location in Sussex. He was an avid runner, was a member of the New York City Central Park Running Club, ran 17 marathons and countless shorter races. Mr. Nasse is survived by his wife, Leda M. Nasse; his daughters, Gale E. Hawkins of Pensacola, Florida, Brenda Nasse of Sussex, Candace Special of Wantage, and Juliana Lagin-Nasse of Halifax, Canada; his brothers, John Nasse, Jr. of California and Peter Nasse of Maine; his sister, Judith Nasse of Woburn, MA; and nine grandchildren. A memorial gathering for Harry Nasse will be held in the Ward-Nasse Gallery, 35 Main Street, Sussex on Saturday, November 3, 2018 from 4 to 9 pm. All those who knew Mr. Nasse are welcome to come to this event to celebrate his life. As Harry was a great lover of all kinds of pets, in lieu of flowers, donations can be made in his name to your local animal shelter. Private cremation services have been entrusted to the Pinkel Funeral Home, 31 Bank Street (Route 23), Sussex. Online condolences may be offered to the family at www.pinkelfuneralhome.com

Sussex - Harry Nasse, age 84, a long-time resident of Sussex, New Jersey, died at his home on Friday, October 26, 2018 while in the care of his daughter. He served in the United States Army from 1956 to 1961. Mr. Nasse received his Bachelor... View Obituary & Service Information

The family of Harry F. Nasse created this Life Tributes page to make it easy to share your memories.

Send flowers to the Nasse family.