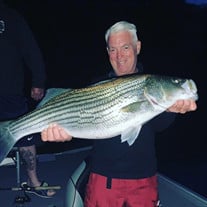 Milford, PA - Gregory M. Borras, Sr., age 61, passed away on Saturday, July 24, 2021. Born in Jersey City to the late Gregory M. and Janet (Holden) Borras, Greg had lived in Sussex County before moving to Milford, Pennsylvania two years ago. He had recently started his own painting company, naming the company Tink after his late daughter, Melissa. Greg was previously a fireman for the North Bergen Fire Department and was a volunteer fireman in both McAfee and Vernon Fire Departments. After moving to Milford, Pennsylvania, he joined the Milford Volunteer Fire and Rescue Department. Greg had a huge heart and enjoyed giving back to the community in various ways. He was very active participating at various Soup Kitchen and volunteered at the homeless shelter in Port Jervis, New York. He loved his family and always made it a point to say how proud he was. He enjoyed fishing and spending time outdoors any chance he got. Gregory has struggled with his addiction for many, many years and made it a point to share his and his family's story to help those in similar situations. Besides his parents, Greg was predeceased his cherished daughter, Melissa Borras on August 3, 2015. He is survived by his sons, Richard “Ricky” Willett of Montague, Greg Borras of Belmar and Jake Borras of Montague; his daughter, Caitlin Borras of Montague; his grandchildren, Layla Marie, Allana Bella, and Scarlett Victoria; his wife, Sandra Borras of Sebring, Florida; and his former wife, Donna Borras of Sussex. Memorial services will be held at 6 p.m. on Friday, July 30, 2021 at Pinkel Funeral Home, 31 Bank Street (Route 23), Sussex. Friends may pay their respects to the family on Friday prior to the service from 4 p.m. to 6 p.m. at the funeral home. Private cremation services have been held at the convenience of the family. In lieu of flowers, the family requests that memorials donations may be made in Gregory M. Borras Sr.’s memory to the Carbon-Monroe- Pike Drug and Alcohol Commission, 724 Phillips Street, Suite 203, Stroudsburg, PA 18360.

The family of Gregory M. Borras Sr. created this Life Tributes page to make it easy to share your memories.

Send flowers to the Borras family.