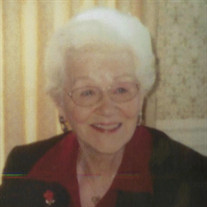 Wantage - Gladys R. McGoonan, age 98, peacefully passed away while surrounded by her loving family on Wednesday, March 20, 2019 at Karen Ann Quinlan Home for Hospice. Born in Manhattan, New York to the late Harold and Amelia (Tait) Behrman, Mrs. McGoonan lived in The Bronx before moving to Bergen County in 1965. She lived in Bergen County until she moved to Sussex County in November 1980 to live with her son and his family. Besides her parents, she was predeceased by her husband, Stephen McGoonan, Sr. in 1974; her daughter, Carol Ann Walker in 1985; and her grandson, Stephen McGoonan, Jr. in 2017; her siblings, Richard Behrman, Shirley Woods, and Marilyn Doherty. Mrs. McGoonan is survived by her son, Stephen R. McGoonan and his wife Joy of Wantage; her brother, Thomas Bainton and his wife Carmen of Pennsylvania; her sister, Connie Schwartz of New Milford; her grandchildren, James McGoonan and his wife Amanda, Sean McGoonan and his wife Ashley, Lori Fedirko and her husband Keith and Tammy Hobar and her husband James, III.; and her great grandchildren, TJ Fedirko, Megan Hobar, and Dona McGoonan. Funeral services will be held at 10 a.m. on Saturday, March 30, 2019 at the Pinkel Funeral Home, 31 Bank Street (Route 23), Sussex. Interment to follow at George Washington Memorial Park in Paramus. Friends may pay their respects to the family from 5 p.m. to 8 p.m. on Friday at the funeral home. In lieu of flowers, the family requests that memorial donations may be made in Gladys McGoonan's memory to Karen Ann Quinlan Center of Hope Hospice, 99 Sparta Avenue, Newton, NJ 07860. Online condolences may be offered to the family at www.pinkelfuneralhome.com

The family of Gladys R. McGoonan created this Life Tributes page to make it easy to share your memories.

Send flowers to the McGoonan family.