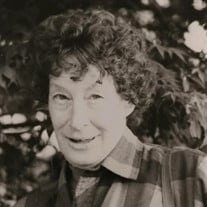 Port Jervis, NY - Geraldine Snyder, age 74, passed away on Friday, January 20, 2017 at Orange Regional Medical Center in Middletown, New York. Born and raised in Sussex to the late John and Violet (Gordon) Boyd, Mrs. Snyder was raised in Sussex County and lived in Port Jervis, New York for the past 22 years. She had been employed as a seamstress for Elaine's Fashions in their Sussex and then Port Jervis, New York location. Mrs. Snyder was predeceased by her husband, Donald Snyder; her brothers, Asa Boyd, Sr., Fred Boyd, Sr., Alfred Boyd, Sr., John Boyd, Sr., and Charles Boyd, Sr.; and her sisters, Elizabeth Gould and Dorothy Rouiollard. She is survived by her sons, Clinton Crowell and his wife Alice of Yorktown, Virginia and Ronald Snyder and his fiance April of Milford, New Jersey; her daughter, Anna M. Long and her husband Thomas of Matamoras, PA; her grandchildren; Apryl Beth, CJ, Alyssa, Tiffani, Nicole, Alan, Ryan, and Thomas; her great grandson, Caleb Ryan; and her extended step grandchildren. Private funeral services for the family were under the direction of the Pinkel Funeral Home, 31 Bank Street (Route 23), Sussex with Interment at Beemerville Cemetery. The family requests that memorial donations may be made to the St. Judes Children's Research Hospital, 501 St. Jude Place, Memphis, TN 38105. Online condolences may be offered to the family at www.pinkelfuneralhome.com

The family of Geraldine Snyder created this Life Tributes page to make it easy to share your memories.

Send flowers to the Snyder family.