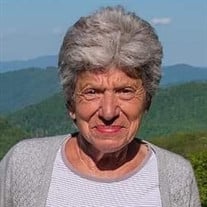 Frankford Township - Georgette Evelyn “Evie” Dalrymple, age 91, passed away on Thursday, March 31, 2022 at Warren Haven Rehabilitation and Nursing Center in Oxford. Born in Clifton on May 15, 1930 to the late George and Mary (Abboud) Zitone, Evie grew up in Montague before she moved to Frankford Township. She had been employed as a claims department clerk for Selective Insurance in Branchville and also was employed by the Sussex County Arts and Heritage Council, where she spent much of her time volunteering as well. Evie worked for the election board and helped her daughter, who owned the Lyons House in Ogdensburg for many years. In her younger years, she was a cub scout leader and was on the PTA in Frankford Township. Evie was a member of the Christ Episcopal Church in Newton for many years. A lifelong gardener, Evie loved to cook and bake for her family. She was known as “Grandma Evie” to two generations of children in her life, and was always ready to make a special diner, cookies or pies for her family and friends She was predeceased by her husband, John Grant “Jack” Dalrymple; her brother, Joseph Zitone; and her sisters, Lorraine Zitone and Helen Gassmann. Evie is survived by her two sons, John Dalrymple and his wife Nona of Frankford Township and David Dalrymple and his partner, Thomas Branigan, Jr. of New York, New York; her daughter, Julie Coleman and her husband Jim of Bradenton, Florida; her brother, Edward Zitone of Montague; her sister, Joyce Helms of New York State; six grandchildren; seventeen great grandchildren; two great great grandchildren; and her many loving nieces and nephews. Memorial services will be held on Friday, April 29, 2022 at 10 a.m. at the Pinkel Funeral Home, 31 Bank Street (Route 23), Sussex. Inurnment will immediately follow at Beemerville Cemetery. Friends may pay their respects to the family on Thursday, April 28, 2022 from 6 p.m. to 8 p.m. at the funeral home. Online condolences may be offered to the family at www.pinkelfuneralhome.com.

The family of Georgette Evelyn “Evie” Dalrymple created this Life Tributes page to make it easy to share your memories.

Send flowers to the Dalrymple family.