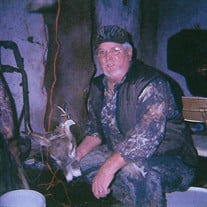 Wantage - George R. Sherman, Jr., age 73, passed away on Tuesday, November 17, 2020 at his residence. Born in Middletown, New York to the late George R. Sherman, Sr. and Mary M. (Truex) Sherman. George served in the United States Army during the Vietnam War. He had lived in Middletown for most of his life before moving to Sussex County 35 years ago. George was employed as a butcher for the A & P Supermarkets. He had worked in several stores over his career and retired from the Vernon store. He enjoyed hunting, fishing and his time spent at the hunting camp in New York State. Besides his parents, he was predeceased by his sister, Bonnie Norwood and his former wife, Candi Sherman. George is survived by his wife, Sara (Kantenwein) Sherman; his son, George R. Sherman, III of New Hampton, New York; his step-daughter Michelle Mezger and her husband Mike of Sussex; his step-son, Stan Gardner of Wantage; his brothers, Tom Sherman of Middletown, New York; Bob Sherman and his wife Sue of Greenville, New York; Greg Sherman of Cincinnati, Ohio; and Tom Tyler Shoemaker and his wife Angel of Middletown, New York; his sister, Mary Wiltshire and her husband Ray of Charleston, South Carolina; his three grandchildren, David, Victoria, and Hanna Gardner; as well as several nieces and nephews. The family will have a celebration of George’s life for family and friends at a later date. In lieu of flowers, the family requests that memorial donations may be made in George's memory to St. Judes Children’s Research Hospital, 501 St. Jude Place, Memphis, TN 38105. Private cremation services have been entrusted to the Pinkel Funeral Home, 31 Bank Street (Route 23), Sussex. Online condolences may be offered to the family at www.pinkelfuneralhome.com

The family of George R. Sherman Jr. created this Life Tributes page to make it easy to share your memories.

Send flowers to the Sherman family.