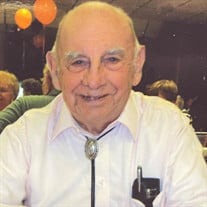 Wantage - Frank S. Swarts, age 93, passed away on Wednesday, January 12, 2022 at Karen Ann Quinlan Home for Hospice in Fredon. Born in Wantage on January 26, 1928 to the late Howard and Bertha (Compton) Swarts, Frank graduated from Sussex High School, where he was an outstanding basketball player and athlete. He grew up on the Swarts Homestead Farm and upon marrying his wife, the former Alice Elizabeth Elston on May 8, 1949, they settled into the home and they were the fifth generation of the Swarts family to reside there. In his younger years, Frank was the recipient of the American Farmers Award at Kansas City on October 11, 1949. He continued his family heritage and maintained a dairy farmer until his retirement. Besides owning and operating the dairy farm, Frank began to work for Pinkel Funeral Home in Sussex, where he continued to work until he was in his 80's. Frank and his wife Alice were known for their cooking and catered many affairs throughout the county and eventually ran the Airport Diner together for several years. Frank continued to use his culinary skills in the many organizations he was involved in and people knew good food was to be had when they saw his face in the kitchen. Frank was one of the founding members of the Sussex Elks Club, whose building was built on the land that his wife’s family had donated, an exempt member of the Colesville Fire Department, founding member of the Virgin Acres Gun Club, past president and active member of the Sussex Kiwanis Club, honorary member of the American Legion Post 213 in Sussex, and formally served as a board member on the Clove Cemetery Association. Besides his parents, he was predeceased by his sisters, Ida Louis Shorter and Janet Costanza. Frank is survived by his wife of 72 years, Alice (Elston); his two sons, Frank E. Swarts and John Swarts both of Wantage; his two daughters, Galeen Swarts and her wife Debra Pollard of Byram and Jody Swarts of Brewster, Massachusetts; eight grandchildren and five great grandchildren. Friends may pay their respects to the family on Sunday, January 23, 2022 from 2 p.m. to 4 p.m. at the Pinkel Funeral Home, 31 Bank Street (Route 23) Sussex. Funeral services will immediately follow at 4 p.m.. Private interment will be held at Clove Cemetery at the convenience of the family. In lieu of flowers, please consider a memorial donation in Frank’s memory to Sussex Fire Department, 25 Loomis Avenue, Sussex, NJ 07461, American Legion Post 213, P.O. Box 447, Sussex, NJ 07461 or Sussex Kiwanis, P.O. Box 363, Sussex, NJ 07461. Online condolences may be offered to the family at www.pinkelfuneralhome.com

The family of Frank S. Swarts created this Life Tributes page to make it easy to share your memories.

Send flowers to the Swarts family.