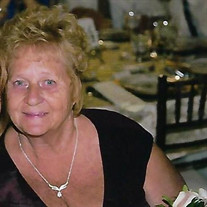 Sussex - Frances E. Mc Cave, age 71, passed away on Friday, April 6, 2018 at Newton Medical Center while surrounded by her loving family. Born in Branchville to the late Howard and Mary (Bloom) Drake, Fran has lived in Sussex County all of her life and she enjoyed her winters in Lakeport, Florida. She had worked at the former Morley’s Shirt Factory in Franklin as a seamstress and retired from the Sussex-Wantage School District 10 years ago. Fran was a former member of the Ladies Auxiliary of the American Legion Post 213 in Wantage, a former Auxiliary member of Frankford Fire Department, a lifetime member of the Sandyston Fire Department Auxiliary, a former member of the Sussex Borough Recreation Commission, and a member of the former Sussex-Wantage Playground Committee. She is survived by her husband of 49 years, Glen G. Mc Cave; her son, Glenn “Zip” Mc Cave and his wife Andrea of Wantage; her daughters, Mary Ellen Newberry Williams of Sussex, Loretta Meyer and her husband Steve of Wantage, and Wilhemina “Willie” Newberry of Vernon; her step-daughter, Debbie Mc Cave of Oregon; her brothers, Howard Drake and his wife Brenda of Shahola, PA, Edward Drake and his wife Maureen of Sandyston, Fred Drake and his wife Debbie of Montague, and Douglas Drake of Montague; her sisters, Dorothy Stengel and her husband Ben of Colorado, Jennie Snover of Port Jervis, New York, Bertha Van Acker of Hardyston, and Loretta Young and her husband Robert of Lakeport, Florida; her grandchildren, Sara, Derek, Stephanie, Ali, Stephen, Erica, Erin, Deni Lynn, and Ella; her great grandson, Bradley; and many nieces and nephews. Funeral services will be held at 7 p.m. on Tuesday, April 10, 2018 at the Pinkel Funeral Home, 31 Bank Street (Route 23), Sussex Friends may pay their respects to the family on Tuesday from 4 p.m. to 7 p.m. at the funeral home. In lieu of flowers, memorial donations may be made to the family or the funeral home to help defray the cost of the funeral. Online condolences may be offered to the family at www.pinkelfuneralhome.com.

Sussex - Frances E. Mc Cave, age 71, passed away on Friday, April 6, 2018 at Newton Medical Center while surrounded by her loving family. Born in Branchville to the late Howard and Mary (Bloom) Drake, Fran has lived in Sussex County all of... View Obituary & Service Information

The family of Frances E. Mc Cave created this Life Tributes page to make it easy to share your memories.