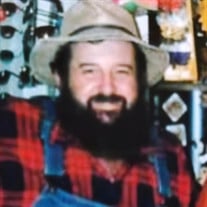 Wantage - Elmer John Denman, age 71 passed away peacefully on Tuesday, January 12, 2021 after a brief stay at Barn Hill Rehabilitation Center in Newton. Born to Elmer T. and Jeannie L. (Housel) Denman on December 6, 1949, he came home to their small farm in the Town of Greenville, NY. He grew up attending schools over the border in Wantage, where the family moved later in his childhood. After graduating high school, he attended the University of Georgia and served in the US National Guard for several years during the Vietnam era. In Georgia, he met his wife-to-be, Joan Marie Ryan. They were married on August 14, 1970 at Emmanuel Episcopal Church in Athens, Georgia. They had five children and just recently celebrated their 50th wedding anniversary. The two would try their hand at subsistence farming in various locales and John would work various jobs throughout. The family eventually settled back into the Tri-State region. John returned to work for Pleasant Acres Farm Campground, a business started by his parents and that he had helped to build. Here he was affectionately known as 'Papa John' in later years. Along with taking care of various maintenance and farm aspects, he helped in providing hospitality and recreation for hundreds of families throughout the years. John was the regular cook for morning breakfasts where he served up french toast or pancakes for campers waking up on their vacations. He'd help travelers get their trailers on or off site, even if it meant hooking up a tractor to do so. John also continued farming and raised rabbits for several decades, providing bunnies for local pet shops. One of his greatest joys was introducing baby animals to the children who enjoyed their summers at the camp. He is certainly cherished and will be missed. Besides his parents, John was predeceased by his brother, Bill Denman; his granddaughter, Mollie and his dear friend, Robert Kaltoff. John is survived by a large family; including his devoted wife, Joan of Wantage, his children, Jeannie Denman of AR, Elmer Joseph Denman of NC, John Michael Denman and his partner Lisa Myers of Wantage, Jason Robert Denman of NC and James Aaron Denman and his wife Tanya Wilson of ME; his brothers, Daniel Lee Denman and his wife Denise of New York State, Kenneth Michael Denman and his wife Kathie of New York State, Richard Allen Denman and his wife Madeline of Wantage; and his sister, Beth Denman of Wantage; his three greatest joys, his granddaughters, Baylee Monaco, Maegyn Denman and Rachel Denman; and uncle to nearly a dozen nieces and nephews, to all of whom he taught something. A memorial visitation will be held from 2 to 5 p.m. on Sunday, January 17, 2021 at the Pinkel Funeral Home, 31 Bank Street (Route 23) Sussex. Due to New Jersey government health restrictions, attendees will be limited to 50 visitors and are required to wear face masks at all times and practice proper social distancing. A celebration of life service will be held in the future. In lieu of flowers, please consider a donation in Elmer John Denman’s memory to St. Jude Children’s Research Hospital, 501 St. Jude Place, Memphis, TN 38105. Online condolences may be offered to the family at www.pinkelfuneralhome.com

The family of Elmer John "Papa John' Denman created this Life Tributes page to make it easy to share your memories.

Send flowers to the Denman family.