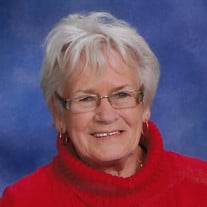 Wantage - Elinor “Ellie” R. Caine, age 77, peacefully passed away on Saturday, June 29, 2019 at Karen Ann Quinlan Home for Hospice while surrounded by her loving family. Born and raised in Manhattan, New York to the late Joseph and Katherine (Bjornsen) Vik, Ellie lived in Franklin before moving to the Lake Neepaulin section of Wantage in 1999. When younger, Ellie summered in the Lake Wallkill section of Vernon, where she was a life guard and met her late husband, Robert. She was a life guard at the Franklin Pond in the 1970's, was a seamstress for the former Morley’s Shirt Company in Franklin, and worked at North Country Pharmacy in Franklin. Ellie and her husband ran Bob and Ellie’s Bar in Hamburg together since 1989. She sold the business in 1998 after her husband passed away. She joined the Sussex United Methodist Church in 2008 and became a very active member. She was a member of their Barn Crew, the Woman’s Group, and attended the Sunday and Tuesday Bible Study Group. Ellie also volunteered with Meals on Wheels from 2005 to 2018. She was predeceased by her husband, Robert Caine in 1997; her son, Mark Caine in 1998; and her brother, Robert Vik in 2012. She is survived by her son, Matthew Caine and his wife Barbara Ann of Wantage; her two daughters, Linda Lewallen and her husband Terry of California and Irene Trywusch and her husband Darrin of Wantage; her brother, Lester Vik and his wife Anne of Long Island, New York; her daughter-in-law, Moira Caine of Wantage; her sister-in-law, Mary Vik of Landing; 10 grandchildren; and 12 great grandchildren. Funeral services will be held at 5 p.m. on Wednesday, July 3, 2019 at the Pinkel Funeral Home, 31 Bank Street (Route 23), Sussex. Friends may pay their respects to the family from 2 p.m. to 5 .m. at the funeral home. Private cremation services will be held at the convenience of the family. In lieu of flowers, the family requests that memorial donations may be made Karen Ann Quinlan Center of Hope Hospice, 99 Sparta Avenue, Newton, NJ 07860. Online condolences may be offered to the family at www.pinkelfuneralhome.com

The family of Elinor "Ellie" R. Caine created this Life Tributes page to make it easy to share your memories.

Send flowers to the Caine family.