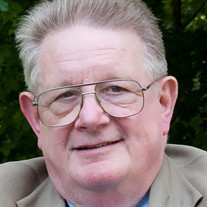 Wantage -Earle Saul Seely, age 83, entered into eternal rest at his home, Sunday, March 8, 2020, surrounded by his loving family. Earle was born in Dover to the late Earle and Dorothea Seely and grew up in Andover. He graduated from Newton High School in 1954. Earle married the love of his life, Marilyn Crowell of Beemerville in 1961. They lived in Boonton and Boonton Township and eventually settled in Beemerville. Earle worked at Radio Frequency Laboratories in Boonton Township for over 40 years in the Magnetics Department as a project manager, designing and selling equipment. He then worked from home for Walker Scientific based out of Worchester, MA, until his retirement in 2002. He was an active member of the First Reformed Church of Boonton, where he served as an Elder and as the Church Organist for over 50 years. Earle was also a life member of the Boonton Kiwanis First Aid Squad, where he volunteered as an EMT for many years and served a term as its President. He was also active in the Boy Scouts, serving as Scout Master of Troop 2 in Boonton and a member of the New York Theatre Organ Society. Earle had many interests, but his greatest passion was music and he is best known for playing the pipe organ; theater organ was his favorite. In his later years, he played at the Lafayette Movie Theater in Suffern, NY, and enjoyed volunteering at Bristol Glen in Newton entertaining the residents. Earle was predeceased by his parents and wife. He is survived by his son, Earle “Ned” and his wife Dawn; his daughter, Rebecca and three grandchildren, Casey, Emily and Daniel. A memorial service will be held at the First Reformed Church in Boonton on Sunday, March 22, 2020, at 3 PM. In lieu of flowers, the family asks to please consider donations in Earle’s memory to the First Reformed Church of Boonton; 236 Washington Street, Boonton, NJ, 07005; the Boonton Kiwanis First Aid Squad; 150 Lathrop Ave PO Box 16, Boonton, NJ, 07005, or the Wantage First Aid Squad, 888 Route 23, Wantage, NJ, 07461. In addition, the family would like to thank the many staff members, nurses, and doctors at Newton Medical Center and Bristol Glen of Newton, many of whom knew Earle on a first name basis. Your great compassion and tender care toward Earle and Marilyn provided much comfort for them and for our family. You are truly angels on Earth. Private cremation services have been entrusted to the Pinkel Funeral Home, 31 Bank Street (Route 23), Sussex. Online condolences may be offered to the family at www.pinkelfuneralhome.com

Wantage -Earle Saul Seely, age 83, entered into eternal rest at his home, Sunday, March 8, 2020, surrounded by his loving family. Earle was born in Dover to the late Earle and Dorothea Seely and grew up in Andover. He graduated from Newton... View Obituary & Service Information

The family of Earle Saul Seely created this Life Tributes page to make it easy to share your memories.

Send flowers to the Seely family.