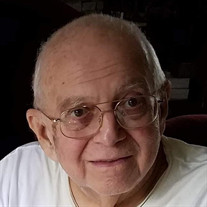 OBITUARY FOR Douglas Cherkas Wantage - Douglas Cherkas, age 84, unexpectedly passed away on Tuesday, April 5, 2016 at his residence. Born in Passaic to the late Michael and Mary Irena Cherkas, Doug had moved to Sussex County in 1975. He had served in the United States Navy during the Korean Conflict as a radio operator. Doug was a member and former Past Commander of the American Legion Post 213 in Wantage and also was Past County Commander. He was a member of the Sussex United Methodist Church, served on the Barn Crew and formally served as a Trustee and on the Administrative Board. Doug was a HAM Radio Operator (W2IDO), a member of the Sussex County Amateur Radio, the Wanders Car Club, NUMISMATICS Coin Club, and a former member of the Model A Club. He had been employed at Western Union in Vernon before his employment at the United States Post Office in West Milford. Upon his retirement in 1996 from the Post Office, Doug worked for Napa Auto Parts in Sussex. He was predeceased by his first wife, Hazel in 1982; his second wife, Marilyn in 2000; his son, Christopher Noel Cherkas in 1955; and his sister, Nellie Cherkas in 1979. Doug is survived by his wife, Mary Rome; his two daughters, Lori Hanna and her husband Azem of Andover and Karen Deatherage and her husband Dwight of Rising Sun, Maryland; his step-son, Stephen Rome and his wife Susan M. of Wantage; and his grandchildren, Jared Hanna and his wife Maureen of Franklin, Christopher Hanna of Andover, Sarah and Rachel Rome both of Wantage, and Drew Deatherage of Rising Sun, Maryland. Funeral services will be held at 10 a.m. on Saturday, April 9, 2016 at the Sussex United Methodist Church, 15 Bank Street, Sussex, NJ 07461. Interment to follow at Clove Cemetery, Route 23, Wantage. Friends may pay their respects to the family on Friday, April 8, 2016 from 2-4 and 7-9 p.m. at the Pinkel Funeral Home, 31 Bank Street (Route 23), Sussex with American Legion services at 7:30 p.m.. In lieu of flowers, the family requests that memorial donations may be made to the American Legion Post 213, Scholarship Fund, P.O. Box 447, Sussex, NJ 07461 or to the Sussex United Methodist Church, Memorial Fund, 15 Bank Street, Sussex, NJ 07461. Online condolences may be offered to the family at www.pinkelfuneralhome.com

OBITUARY FOR Douglas Cherkas Wantage - Douglas Cherkas, age 84, unexpectedly passed away on Tuesday, April 5, 2016 at his residence. Born in Passaic to the late Michael and Mary Irena Cherkas, Doug had moved to Sussex County in 1975. He... View Obituary & Service Information

The family of Douglas Cherkas created this Life Tributes page to make it easy to share your memories.

Send flowers to the Cherkas family.