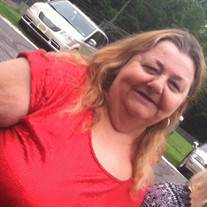 Montague - Dorothy L. Slater, age 68, passed away on Monday, June 6, 2022 at Kindred Hospital at St. Clare's Hospital in Dover after a lengthy illness. Born in Newton to the late Louis A. Babcock, Sr. and Evelyn May (Keepers) Babcock, Dorothy had lived in Franklin for most of her life until she moved to Montague a few years ago. She loved to crochet; especially baby blankets and also enjoyed going to bingo. Besides her parents, she was predeceased by her husband, Kenneth E. Slater, Sr. in 2011; her brother, Louis A. Babcock, Jr. in 1951; her sister, Helen Mackerley in 1990; her two grandchildren, Noel and Cory; and her great nieces and nephew, Brianna (her birthday twin) in 2011, Mayson in 2005, Sofia in 2019, and Heaven in 2021. Dorothy is survived by her sons, Raymond Babcock and Kenneth E. Slater, Jr. both of Sussex; her daughters, Helen Wittig and her late husband John (2017) of Princeton, Sandra Slater of Vestal, New York, Hope Howey and her husband Carl, Jr. "Buck" of Sussex, and Jennifer Barretto of Vernon; her sisters, Sandra Webb and her husband Bill of Franklin and Brenda Toth and her late husband Paul (2011) of Sussex; her brother-in-law, Robert E. Mackerley, Sr of PA; 29 grandchildren; 9 great grandchildren; and many nieces and nephews. Funeral services will be held at 12 noon on Monday, June 13, 2022 at the Pinkel Funeral Home, 31 Bank Street (Route 23), Sussex. Interment to follow at North Hardyston Cemetery. Friends may pay their respects to the family prior to the service on Monday from 10 a.m. to 12 noon at the funeral home. In lieu of flowers, please consider a donation in Dorothy's memory to the funeral home to help defray the funeral expenses. Online condolences may be offered to the family at www.pinkelfuneralhome.com

Montague - Dorothy L. Slater, age 68, passed away on Monday, June 6, 2022 at Kindred Hospital at St. Clare's Hospital in Dover after a lengthy illness. Born in Newton to the late Louis A. Babcock, Sr. and Evelyn May (Keepers) Babcock, Dorothy... View Obituary & Service Information

The family of Dorothy L. Slater created this Life Tributes page to make it easy to share your memories.

Send flowers to the Slater family.