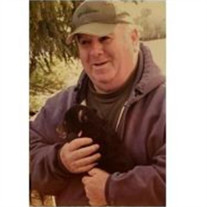 Donald “Donnie” C. Unangst Jr., age 73, passed away on Monday, January 4, 2021 at Overlook Medical Center in Summit. Born in Sussex at the Alexander Linn Hospital to the late Donald and Armilla (Brophy) Unangst, he was a lifelong resident of Sussex and then Wantage. Donnie is survived by his loving wife, his “baby girl” he always said, of almost 50 years, Debra L. (Elston); his two sons, Donald III of Hillsborough and Christopher and his wife Meng of Montague; his three precious grandsons, Philip, Trevor and Connor; his sister, Priscilla Pierce; many nieces and a nephew; his favorite sister-in-law, Sharon Tattoli; brother-in-law, Gerry Elston; and also many cousins, especially John Dunn who was more like a brother that Donnie never had. Donnie was a veteran of the Vietnam War (1966 – 1969) serving in the 41st Infantry 2nd Armored Division. He is a proud member of the American Legion Post 213 of Sussex, the VFW of Milford, Pennsylvania and a lifetime member of the Vietnam Veterans of America in Vernon. He also belonged to the local IBEW. Donnie worked as a lineman for Sussex Rural Electric Cooperative for 37 years, ending his career as chief lineman before his retirement in 2008. He enjoyed hunting and belonged to the Virgin Acres Rod & Gun Club in Sussex in his younger years. He also enjoyed trapshooting which he did for many years. His friends used to say that he was "one heck of a good shot." Donnie enjoyed the farm life that was once here and worked on many local farms. He loved it so much that he made sure that his boys experienced it. They had a mini farm with cows, calves, chickens, turkeys, a pet crow named Jimmy and even a pony. Over the years, he and his family also had many beloved dogs and cats. If his children were asked now, they will tell you it was hard labor. He loved his boys with all his heart and would do anything for his family. Donnie’s real passion was fishing, which he enjoyed his whole life. His late father-in-law took him on many trips to Maine in the winters and he developed a real passion for ice fishing. Donnie would even take his boat out fishing early in the mornings before going to work. He also had a trailer in Pennsylvania. where he fished every weekend in the summer months for 14 years. One of Donnie’s favorite places to go and visit for hours “throwing the bull’ was Tire King. Donnie enjoyed getting together with his many friends and classmates, talking about “the good old days” of growing up and living in Sussex and how it once used to be. Some of his friends will remember his GTO. Others will remember his Corvette going around the fountain in Sussex with his friend “Red" Moore standing on the corner and Donnie trying to slow it down. That was one fast car! He also loved going to the races which he did many times. He always called the stores by what was there 60 years ago. If you needed to know information on Sussex back in the day, he was your man. The highlight of his life was his grandchildren. He was fortunate and blessed to have many special times with them and he cherished every moment. He will be forever loved and forever missed. A memorial will be planned in the future, as Donnie would want everyone to be safe. The family is praying for one without masks as to see the smiling faces as everyone gathered remembers Debra’s husband and her best friend, Donnie. Funeral arrangements are under the direction of the Pinkel Funeral Home, 31 Bank Street (Route 23), Sussex. In lieu of flowers, please consider a memorial donation in Donnie’s memory to the American Legion Post 213, 915 State Route 23, Sussex, NJ 07461 or Father John’s Animal House, 50 Father John’s Lane, Lafayette, NJ 07848. Online condolences may be offered to the family on www.pinkelfuneralhome.com.

Donald &#8220;Donnie&#8221; C. Unangst Jr., age 73, passed away on Monday, January 4, 2021 at Overlook Medical Center in Summit. Born in Sussex at the Alexander Linn Hospital to the late Donald and Armilla (Brophy) Unangst, he was a lifelong... View Obituary & Service Information

The family of Donald Clifton Unangst Jr. created this Life Tributes page to make it easy to share your memories.

Send flowers to the Unangst family.