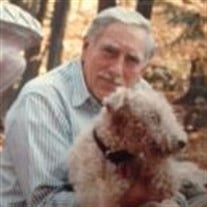 Sussex - Donald F. Guzman, age 89, passed away on Sunday, June 7, 2015 at Bristol Glen Retirement Community in Newton. Born in Union City to the late Domingo and Edna (Spliedt) Guzman, he had lived in Ozone Park, New York and Teaneck prior to moving to Sussex County 30 years ago. He had served in the United States Army during World War II. Mr. Guzman had been the Postmaster at the Teaneck Post Office for 30 years before his retirement. He was a member of St. Monica R.C. Church in Sussex and a member of the Knights of Columbus General Judson Kilpatrick Council No. 5563 of Vernon, where he served as the Grand Knight from 1995 to 1996. He was predeceased by his wife of 55 years, Mary F. Guzman on June 8, 2003. He is survived by his nieces, Priscilla Castrovinci and her husband Phil, JoAnne Reilly and her husband Curt, and Rosemary Foster; his nephews, Joseph Gallucci and Ronald Belletti; his cousins, William Spliedt, Diane Spliedt Fortuna, and Nancy Spliedt; and his close friends and neighbors, David and Suzy Miller and their children Andrew, Erin, and Brian. Funeral services will be held at 9:30 a.m. on Friday, June 12, 2015 at the Pinkel Funeral Home, 31 Bank Street (Route 23), Sussex. Mass of Christian Burial will follow at 10 a.m. at St. Monica R.C. Church in Sussex. Interment at Brigadier General William C. Doyle Veterans Memorial Cemetery in Wrightstown. Friends may pay their respects on Thursday from 7-9 p.m. at the funeral home. In lieu of flowers, memorial donations may be made to the Wounded Warrior Project, 4899 Belfort Road, Suite 300, Jacksonville, Florida 32256. Online condolences may be offered to the family at www.pinkelfuneralhome.com

The family of Donald F Guzman created this Life Tributes page to make it easy to share your memories.

Send flowers to the Guzman family.