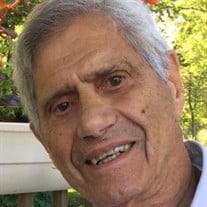 Dominick Anthony Cerchio passed in peace at The Valley Hospital in Ridgewood on Monday, February 1, 2021 while “virtually” surrounded by his loved ones at the age of 91. Dominick was born on October 18, 1929 in Jersey City. It is there, in 1944, where he met his “one and only” love, Marie DeVito Cerchio through neighborhood friends. From then on, the two became inseparable. Dominick enlisted in the United States Army in 1948 and was discharged in 1950 as an in-active reservist. Dominick and his wife, Marie married in 1950, which was during the onset of the Korean War. In the fall of 1950, Dominick was called back to serve his country in the U.S. Army Second Infantry Division and was stationed in Landshudt, Germany for eleven months until his discharge in 1951. This completed two and a half years in the armed forces. Upon his return, Dominick and Marie started their family and opened Dom’s Delicatessen in North Bergen, where people lined up for his famous German potato salad until 1978. That year, Dominick and Marie relocated to their log cabin in Wantage. After spending a short time as a security guard at Newton Hospital, Dominick decided to open up his own hot dog stand on Route 639 alongside Sussex Airport. For the next 20 years his customers would easily spot his bright blue and yellow umbrella, pull up for a meal, and enjoy a friendly conversation with “The Hot Dog Man.” A member of St. Monica R.C. Church in Sussex, Dominick was a devout Catholic who was proud of his Italian heritage and the north star in his family’s lives. He was a true “renaissance man;” an artist, a poet, and a constant story and joke-teller. He was adored by everyone that knew him and he will be greatly missed. He is survived by his wife Marie Cerchio; their children, Claudia Cerchio Allocco and her husband James, Steven Cerchio and his wife Mimi, and Christopher Cerchio and his wife Celia; his ten grandchildren, Jennifer Allocco, Christina Cerchio Morel, David Allocco and his wife Tina, Matthew Cerchio and his wife Cristina, Anthony Cerchio and his wife Terri, Nicholas Cerchio and his wife Marisa, Jessica Cerchio Cherboni and her husband Ray, Andrew Cerchio and his wife Samantha, Dominic Cerchio and his wife Abby, and Katie Cerchio Fugman and her husband Stephen; and 13 great grandchildren who loved their “G-G-Pa.” He is also survived by his beloved brother-in-law, Dominic DeVito and his wife Marjorie and their children, Rachel and Alex, who are two of his numerous nieces and nephews. Private graveside services for the family will be held at Clove Cemetery in Wantage. In lieu of flowers, please consider a memorial contribution to the Alzheimer’s Association in Dominick Cerchio’s memory. Dominick took such wonderful and loving care of his wife who has been inflicted with this horrible disease and felt that the Association was a worthy organization that may be able to help someone in the future. Online condolences may be offered to the family at www.pinkelfuneralhome.com

Dominick Anthony Cerchio passed in peace at The Valley Hospital in Ridgewood on Monday, February 1, 2021 while &#8220;virtually&#8221; surrounded by his loved ones at the age of 91. Dominick was born on October 18, 1929 in Jersey City. It is... View Obituary & Service Information

The family of Dominick Anthony Cerchio created this Life Tributes page to make it easy to share your memories.

Dominick Anthony Cerchio passed in peace at The Valley Hospital...

Send flowers to the Cerchio family.