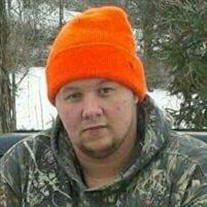 Wantage - Devin M. Glasner Gould, age 27, passed away on Thursday, September 7, 2017 at Morristown Memorial Hospital. Born in Pequannock, Devin graduated from High Point Regional High School in 2009, where he wrestled and played football. He enjoyed hunting, fishing, and playing cards. Devin had been employed as a Shift Leader at Quick Chek in Franklin for over two years. He was predeceased by his great grandfather, Donald Gould, Sr., his great grandmother, Bessie (Nanny) Gould; his grandfather, William D. Ehrman; his grandmother, Kathleen Ehrman; and his grandfather, Donald Glasner. Devin is survived by his fiancé, Megan Graves; his son, Brayden Michael; his parents, William and Nancy Gould of Branchville and James A. Glasner of Portageville, New York; his brother, Billy Gould, Jr. of Branchville; his sister, Krystal Heinzelman of Dingmans, PA; his grandfather, Donald Gould, Jr; his grandmother, Margaret Gould; his grandmother, Linda Glasner; and loved by many aunts, uncles, and cousins. Memorial services will be held at 7 p.m. on Tuesday, September 12, 2017 at the Pinkel Funeral Home, 31 Bank Street (Route 23), Sussex. Friends may pay their respects to the family prior to the service from 4 p.m. to 7 p.m. on Tuesday at the funeral home. In lieu of flowers, the family requests that contributions may be made to benefit the future education of Devin’s son, Brayden Michael Glasner. Online condolences may be offered to the family at www.pinkelfuneralhome.com.

The family of Devin M. Glasner Gould created this Life Tributes page to make it easy to share your memories.