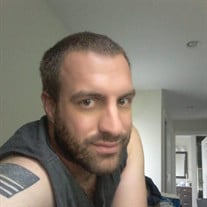 Wantage - Daniel Sloane Conrad, age 31, passed away on Saturday, September 21, 2019 at Newton Medical Center. Born in Elizabeth, Daniel moved to Sussex County in 1999. He served in the United States Army in Afghanistan, Iraq and different parts of the Middle East and received many commendations for his honorable service. Daniel was currently employed by Shop Rite in Franklin. He was predeceased by his paternal grandmother, Joyce Conrad in 2016 and his maternal grandfather, William A. Worrell in 1999. Daniel is survived by his parents, Edward Conrad of Wantage and Kara Worrell of Jacksonville, Florida; his brother, Robert Foti of Jacksonville, Florida; his uncle and Godfather, Bobby Conrad of Wantage; his Godmother, Ellen Margaret Rast of Fredon; his uncles, David Conrad of Cranford and Ian and Douglas Worrell both of Toms River; his aunt, Kristin Worrell of Toms River; his maternal grandmother, Carol Deans-Heiser of Winston-Salem, North Carolina; his paternal grandfather, Ashley “Ace” Wayne Conrad of Wantage; and many cousins. Funeral services will be held at 7 p.m. on Thursday, September 26, 2019 at Pinkel Funeral Home, 31 Bank Street (Route 23), Sussex. Friends may pay their respects to the family on Thursday prior to the service from 4 to 7 p.m. at the funeral home. Private cremation services will be held at the convenience of the family. Online condolences may be offered to the family at www.pinkelfuneralhome.com.

The family of Daniel Sloane Conrad created this Life Tributes page to make it easy to share your memories.

Send flowers to the Conrad family.