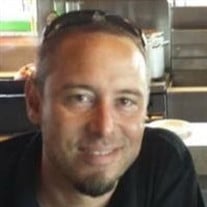 Stillwater - Christopher P. Janosch, age 47, passed away on Tuesday, September 11, 2018 at his residence in Stillwater. Born in Newton, Chris grew up in the Culver’s Lake area in Frankford and had lived in Sussex County all of his life. He enjoyed boating on the lake and fishing and hunting in the area. Chris graduated from High Point Regional High School in 1989 and attended Becker College in Worcester, Massachusetts. He had a passion for baseball and especially liked the Yankees. He also was a devoted San Francisco 49ers fan and was very fond of cats. He was self-employed; owning and operating, Your Castle Installations. Chris is survived by his wife, Sheryl; his son, Patrick; his father, Martin Janosch and his wife Joan Peterkin of Oakridge, Oregon; his mother, Nikki Janosch and her husband Julian Smith of Trinity, Florida; his brother-in-law, Tucker O’Brien and his wife Terry of Westtown, New York; his niece, Brandi O’Brien of Westtown, New York; his aunts, Peg Janosch of Oakland, California, Melanie Wilson of Kittery, Maine, and Shirley Mudd of Nixa, Missouri; and many cousins. Friends may pay their respects to the family on Saturday, September 15, 2018 from 11 a.m. to 2 p.m. at the Pinkel Funeral Home, 31 Bank Street (Route 23), Sussex. Funeral services will directly follow at 2 p.m. at the funeral home. Private cremation services will be held at the convenience of the family. In lieu of flowers, the family requests that donations may be made in Christopher’s memory to the American Legion Post 157, 325 US Highway 206, Branchville, NJ 07826 or to the Salvation Army, 4 Gary Road, Union, NJ 07083. Online condolences may be offered to the family at www.pinkelfuneralhome.com

Stillwater - Christopher P. Janosch, age 47, passed away on Tuesday, September 11, 2018 at his residence in Stillwater. Born in Newton, Chris grew up in the Culver&#8217;s Lake area in Frankford and had lived in Sussex County all of his life.... View Obituary & Service Information

The family of Christopher P. Janosch created this Life Tributes page to make it easy to share your memories.

Send flowers to the Janosch family.