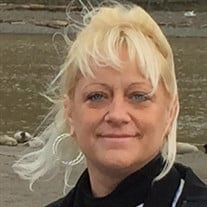 Hawley - Christine A. Fluhr, age 51, passed away on Wednesday, September 25, 2019 at Geisinger Community Medical Center in Scranton, Pennsylvania. Born in Pompton Plains, Christine was raised in Kinnelon, New Jersey and moved to Hawley, Pennsylvania in 2012. She was predeceased by her husband, John K. Parry on July 16, 2019. She is survived by her son, Jacob R. Parry of Hawley, PA; her parents, Robert E. Fluhr of Hardyston and Marilyn (Holden) Fluhr of Hawley; her brother, Richard Fluhr and his wife Mary of Ogdensburg; her sister, Brenda Fluhr of Hawley, Pennsylvania. Memorial services will be held at 7 p.m. on Tuesday, October 1, 2019 at the Pinkel Funeral Home, 31 Bank Street (Route 23), Sussex. Friends may pay their respects to the family one hour prior to the service from 6 p.m. to 7 p.m. at the funeral home. Private cremation services were held at the convenience of the family. In lieu of flowers, the family requests that memorial donations may be made to the Pike County Humane Society, 186 Lee Road, Shohola, PA 18458. Online condolences may be offered to the family at www.pinkelfuneralhome.com

The family of Christine A. Fluhr created this Life Tributes page to make it easy to share your memories.

Send flowers to the Fluhr family.