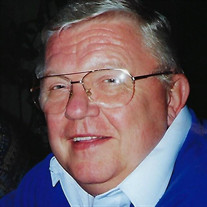 Wantage - Carl Folz. age 80, passed away on Wednesday, October 24, 2018 at Barn Hill Care Center. Born in Maywood to the late Peter and Catherine (Ripkens) Folz, Carl grew up in Maywood and lived in Oradell and then Hackettstown before recently moving to Wantage. He had started his career as a tool and die man for Bergenfield Development and was later employed by Hudson Automatic, President of Nomura, Inc., President of Showa Tool Industries, Vice-President of Kia Heavy Metal Industries and most recently a consultant for Losma in Sparta. Carl was a former member and past president of the Maywood Kiwanis Club, former member and president of the Maywood Republican Club, former member and president of the Garfield Cadets Booster Club, and a member of the Fourth Degree of the Augustus J. Rampone Council #2450 of the Knights of Columbus in Hackettstown. Carl enjoyed racing cars, cannon ball racing, driving on different tracks, and fishing with his brother-in-law. His most memorable time fishing was when he went for the first time and caught a 40 pound fish. Besides his parents, Carl was predeceased by his granddaughter, Katie Folz. He is survived by his wife of 59 years, Louise (Killian); his three sons, Robert Folz and his wife Carmen of Wantage, David Folz and his wife Mary of Hal’s Corner, Wisconsin, and Peter Folz and his husband Charles of Stockton; his sister, Marlene Natale and her husband Ron of Maywood; three grandchildren, Karl, Derek, and Stefan; and his great grandson, Ty Taylor. Mass of Christian Burial will be held at 12 noon on Saturday, October 27, 2018 at St. Monica R.C. Church, 33 Unionville Avenue, Sussex. Friends may pay their respects to the family on Friday, October 26, 2018 from 4 p.m. to 8 p.m. at the Pinkel Funeral Home, 31 Bank Street (Route 23), Sussex, New Jersey. Private cremation services and burial will be held at the convenience of the family. In lieu of flowers, the family requests that memorial donations may be made to Carl Folz’s memory to Karen Ann Quinlan Center of Hope Hospice, 99 Sparta Avenue, Newton, NJ 07860. Online condolences may be offered to the family at www.pinkelfuneralhome.com

Wantage - Carl Folz. age 80, passed away on Wednesday, October 24, 2018 at Barn Hill Care Center. Born in Maywood to the late Peter and Catherine (Ripkens) Folz, Carl grew up in Maywood and lived in Oradell and then Hackettstown before recently... View Obituary & Service Information

The family of Carl Folz created this Life Tributes page to make it easy to share your memories.

Send flowers to the Folz family.