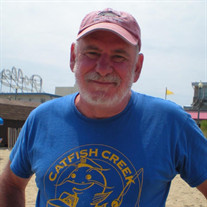 Wantage - Bill Forgerson, age 71, passed away on Friday, March 4, 2022 at his residence. Born in Sussex to the late Willard L. Forgerson, Sr. and Beatrice (Conklin) Forgerson, Bill has lived in the Sussex-Wantage area all of his life. He had been employed as a heavy equipment mechanic for the New Jersey Department of Transportation in Lafayette for 31 years before his retirement. Bill enjoyed hunting and fishing and was a proud lifetime member of the NRA and a member of the Birch Hunting Club in Otisville, New York. He also was a member of the Sons of the American Legion Post 213 and the Sussex Elks Club. Bill is survived by his wife of 51 years, Donna (Pinto), his daughters, Staci Forgerson of Sandyston, Dawn Klein and her husband Richard of Sussex, and Erin Forgerson of Montague; his sister, Carol Owens and her fiancé Michael Garrett of Wantage; seven grandchildren, Morgan and Brady Eckert, Emma Klein, Taylor Bell, Liam Klein, Elijah Jacobson and Blaze Bell; two great grandchildren, Braelyn and Legend Jensen; his former son-in-law, Jeffrey Eckert of Frankford Township; and many nieces and nephews. Funeral services will be held at 6:30 p.m. on Tuesday, March 8, 2022 at the Pinkel Funeral Home, 31 Bank Street (Route 23), Sussex. Friends may pay their respects to the family on Tuesday prior to the service from 4 p.m. to 6:30 p.m. at the funeral home. Private interment will be held at Beemerville Cemetery. In lieu of flowers, please consider a donation in Bill’s memory to OSCAR, P.O. Box 248, Sparta, NJ 07871 or to Father John’s Animal House, 50 Father John’s Lane, Lafayette, NJ 07848. Online condolences may be offered to the family at http://www.pinkelfuneralhome.com/

Wantage - Bill Forgerson, age 71, passed away on Friday, March 4, 2022 at his residence. Born in Sussex to the late Willard L. Forgerson, Sr. and Beatrice (Conklin) Forgerson, Bill has lived in the Sussex-Wantage area all of his life. He... View Obituary & Service Information

The family of Bill L. Forgerson created this Life Tributes page to make it easy to share your memories.

Send flowers to the Forgerson family.