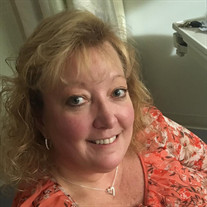 Roxbury - Bernadette Podlaski Albinson, age 52, unexpectedly passed away on Sunday, March 17, 2019 at Saint Clare's Hospital in Dover. Born in Belleville to the late Michael and Kathleen (Goral) Podlaski, Bernadette grew up in Kearny and lived in Sussex County before recently moving to Roxbury. She graduated from Pfeiffer University with her early childhood education degree. Bernadette then went on to pursue a nursing career and received her LPN from Dover business College and continued her education at Excelsior College, where she received her BSN. Bernadette is survived by her son, Alexander Robert Albinson of Wantage; her daughters, Emily Ashley Albinson and her fiancé Daniel Marinelli of Wantage, Shannon Nicole Churchman of Wantage, Kaitlyn Beth Haight and her husband Brian of Vernon; her brother, Michael Podlaski and his son, Joel of Kearny; her three grandchildren, Aaron, Amelia, and Christina; her boyfriend, Danny Laufer of Roxbury; and her former husbands, James Churchman of Wantage and Keith Albinson of Wantage. Friends may pay their respects to the family from 2-4 p.m. and 7-8:30 p.m. on Friday, March 22, 2019 at the Pinkel Funeral Home, 31 Bank Street (Route 23), Sussex. Funeral services will be held at 8:30 p.m. on Friday directly after the visitation at the funeral home. Private cremation services will be held at the convenience of the family. In lieu of flowers, the family requests that memorial donations may be made in Bernadette's memory to the family to help defray the funeral expenses. Online condolences may be offered to the family at www.pinkelfuneralhome.com

The family of Bernadette Podlaski Albinson created this Life Tributes page to make it easy to share your memories.

Send flowers to the Albinson family.