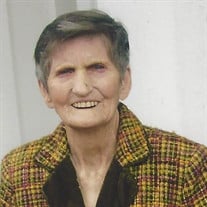 Hamburg - Beatrice (McDonald) Rielley, age 80, passed away on Thursday, July 7, 2016 at her residence while surrounded by her loving family. Born and raised in Paterson, Mrs. Rielley moved to Sussex County in 1972. She had been employed as a waitress for the former Country Meadows Restaurant in Wantage and retired when she was 73 years old from the Sparta Diner after being there for 35 years. Mrs. Rielley had a very generous heart and tried to help people in many ways. She had been a foster mother to several children and she donated monthly to the Wounded Warriors, an organization she felt did many good deeds for soldiers. She was predeceased by her husband, William John Rielley on August 7, 1984; her four sons, Christopher Rielley in 1997, William Rielley in 2005, Frank Maloney in 2008, and Michael Maloney in 2013; and her granddaughter, Jennifer Heinzelman in 2013. Mrs. Rielley is survived by her five sons, Nicholas McDonald of PA, Henry Maloney of PA, Anthony Maloney of Hamburg, Thomas Rielley of Hamburg, and John Hendley of New York State; her five daughters, Mary Maloney of Branchville, Madeline Maloney of Hamburg, Anna Maloney of Hamburg, Myrtle Rielley of Hamburg, and Miranda Rielley of Vernon; her brother, James William McDonald, Jr. of PA; 38 grandchildren and 45 great grandchildren. Funeral services will be held at 11 a.m. on Tuesday, July 12, 2016 at the Pinkel Funeral Home, 31 Bank Street (Route 23), Sussex. Interment to follow at Laurel Grove Cemetery in Totowa. Friends may pay their respects to the family on Monday, July 11, 2016 from 2-4 and 7-9 p.m. at the funeral home. In lieu of flowers, the family requests that memorial donations may be made to the funeral home to help defray the costs of the funeral. Online condolences may be offered to the family at www.pinkelfuneralhome.com

Hamburg - Beatrice (McDonald) Rielley, age 80, passed away on Thursday, July 7, 2016 at her residence while surrounded by her loving family. Born and raised in Paterson, Mrs. Rielley moved to Sussex County in 1972. She had been employed as... View Obituary & Service Information

The family of Beatrice C Rielley created this Life Tributes page to make it easy to share your memories.

Send flowers to the Rielley family.