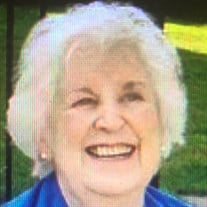 Wantage – Barbara Jean (Hall) Tracy, age 87, passed away on Friday, August 23, 2019 at Orange County Regional Medical Center in Middletown, New York. Born on June 27, 1932 in Newark, New Jersey, to the late Reynold Hall and Helen (Webb) Gardner, Barbara was raised in Hillside. Barbara married Neil Tracy in 1953 and they resided in Summit and Warren Township before moving to Wantage Township in 1973. In her younger years, Barbara was an avid bowler and enjoyed making clothing for her family. She was also an Executive Secretary for the Fireman’s Insurance Co. in Newark and a Secretary for Bristol Meyers Corporation in Hillside. Barbara was a member of the Sussex United Methodist Church since 1973 and was an active member of the church’s women’s group. Barbara was predeceased by her parents and her husband of 61 years, Neil, in 2015. She is survived by her children, Bonnie Jablonski and her husband, Jim, of Seaside Park; Wayne Tracy and his wife, Joann, of Wantage; Tami Waltke and her husband, Eric, of Vero Beach, Florida; and Kim Mikulski of Wantage. Barbara is also survived by 8 grandchildren and 10 great grandchildren. Barbara was a beloved wife, mother, and grandmother, and will be deeply missed by all. Funeral services will be held on Wednesday, August 28, 2019 at 10 a.m. at the Sussex United Methodist Church, 15 Bank Street (Route 23), Sussex. Interment will follow at Somerset Hills Memorial Park in Basking Ridge. Friends may pay their respects to the family on Tuesday, August 27, 2019, from 4 p.m. to 7 p.m. at the Pinkel Funeral Home, 31 Bank Street (Route 23), Sussex. In lieu of flowers, the family requests that donations may be made to the Sussex United Methodist Church, 15 Bank Street, Sussex, NJ 07461. Online condolences may be offered to the family at www.pinkelfuneralhome.com

The family of Barbara J Tracy created this Life Tributes page to make it easy to share your memories.

Send flowers to the Tracy family.