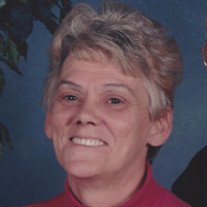 Sussex - Barbara M. Vandermark Space, age 70, passed away on Friday, October 20, 2017 at Barn Hill Care Center in Newton after a courageous fight with her health issues. Born in Wantage to the late Floyd and Bertha (Vandermark) Wood, Barbara has lived in the Sussex-Wantage area for most of her life. She had been a cook along with her husband at the Sussex Queen Diner for many years and retired from the Airport Diner in 2001. Barbara was known to all for her giving, generous, and kind soul who would “give her shirt off her back” to anyone she came into contact with during her life. She was a true friend to all. Barbara revolved her life around her family and her grandchildren and great grandchildren were the absolute joy of her life. She is survived by her husband of 48 years, Wilbur Space; her son, Floyd “John” Space of Sussex; her daughters, Terri PollisonSpace and her fiancé Larry Hill of Sussex and Karen Gould and her husband Edwin of Sussex; her sisters, Loretta Vance and her husband Leonard of Wantage and Betty Turner of Arizona; seven grandchildren, Kristina Corey and her husband Branden, Ryan Space, Jessica Pollison, Edwin Gould, III and his fiancé Jamie Slockbower, Steven Gould and his fiancé Kaitlyn Styer, Owen Gould and his wife Destinie, and Adam Gould all of Sussex; and her two great grandchildren, Logan Wilke and Madison Gould. Memorial services will be held at 4 p.m. on Wednesday, October 25, 2017 at the Pinkel Funeral Home, 31 Bank Street (Route 23), Sussex. Friends may pay their respects to the family on Wednesday prior to the service from 2 to 4 p.m. at the funeral home. Private cremations services have been held at the convenience of the family. Online condolences may be offered to the family on www.pinkelfuneralhome.com

The family of Barbara M. Space created this Life Tributes page to make it easy to share your memories.

Send flowers to the Space family.