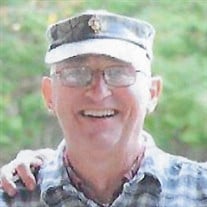 Wantage - Ashley “Ace” W. Conrad, age 81, passed away on Monday, September 20, 2021 at his residence. Born in Newark to the late Earl and Catherine (Cronin) Conrad, Ace lived in Elizabeth before moving to Sussex County in 1999. He served in the United States Marine Corp. from 1958 to 1964. Ace had been employed by the Elizabeth Police Department for 33 years, retiring as a detective. After his retirement, he worked for Sussex County Florist part-time. Ace was a member of the Marine Corps League, member of St. Monica Leisure Club, a former member of the American Legion Post 213 in Wantage, and a former range instructor for the Elizabeth Police Department. Ace enjoyed fishing, hunting, skeet shooting and was a bingo fanatic. Besides his parents, he was predeceased by his son, Michael Conrad; his sister, Patricia Cleary; and his grandson, Daniel Sloan Conrad. Ace is survived by his sons, Eddie and Bobby Conrad both of Wantage and David Conrad and his wife Connie of Colonia; two grandchildren, Michael and Paige; and his companion, Jayne Konkol of Wantage. Funeral services will be held at 1 p.m. at the Pinkel Funeral Home, 31 Bank Street (Route 23), Sussex. Interment and military honors will immediately follow at the Northern New Jersey Veteran Memorial Cemetery in Sparta. Friends may pay their respects to the family prior to the service on Saturday, September 25, 2021 from 11 a.m. to 1 p.m. at the funeral home. In lieu of flowers, please consider a donation in Ashley “Ace” Conrad ’s memory to Marine Toys for Tots Foundation, Gift Processing Administrator, 18251 Quantico Gateway Drive, Triangle, VA 22172. Online condolences may be offered to the family at www.pinkelfuneralhome.com.

The family of Ashley "Ace" W. Conrad created this Life Tributes page to make it easy to share your memories.

Send flowers to the Conrad family.